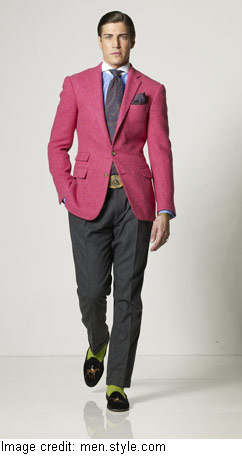 Everyone knows the Ralph Lauren look won’t change. I for one certainly won’t complain. Lauren has an understanding of elegance. His representations of timeless style serve to refresh methods of dress which might otherwise be perceived to be rather fusty and outdated. Historic fashion revival is hit or miss; it is easy to fail in the reintroduction of a past aesthetic. Lauren, for the large part, succeeds. His look book is a key factor in the success of his collections. And while conventional, standard-issue ensembles such as dark blue suits and dark ties, all perfectly cut, are a consistent feature in these idealisations, the best work is when Lauren plays around with formality and colour. Jeans and brogues? Lauren. A bow tie and shorts? Lauren.

This outfit from the 2008 Fall collection is another example of the Lauren mix-and-match ability. The most conventional, dare I say ‘boring’ element of the ensemble is the Astaire-ish grey flannels; turned-up and of an elegantly slim cut. Lauren could have paired these with a blue blazer, foulard tie and plain white pocket square; an inoffensive look but one which, undeniably, lacks imagination. Instead, we are offered a very un-autumnish cocktail of lime green and watermelon pink and it works delightfully well. I have long been a fan of wearing brightly coloured jackets with more sober trousers and rarely do jackets come any brighter, or brasher, than this.

The punch of the jacket is dealt with admirably by the conventional choice of French collared shirt; if the shirt was of a competing ‘rainbow’ colour, say a lemon yellow, the effect would be too dazzling and certainly far too summery for a fall ensemble. It would be an aesthetic drift towards that of a cigar-chewing Miami pimp. The paisley tie is neither too bright nor too dull; the dominant colour from the concoction of colours is a dusky purple which complements both the pink and the grey beautifully. A grey tie would have been a contrivance to ‘connect’ the lower half to the upper half – the resistance of this contrivance is attractive, as is the resistance to match it to the socks although it is matched to the pocket square.

The jacket is not the only loudmouth at the party; a pair of lime green socks adds further, excuse me, ‘zest’ and the velvet slippers with the equestrian motif, a little Elkannish touch of raffish charm, imply that this ensemble is not for the serious rigours of the office but a host’s outfit for an early autumn soiree. The large belt is both my favourite and least favourite element. My paradox is explained by the fact that I believe this ingredient, along with the slippers, to be what Lauren is all about; boundary free style creation. Few gentlemen would pair an item from the ranch with an item from the Manhattan armoire but it does work well, despite my personal inability to wear large buckled cowboy belts. It is for this reason that should I ever affect such an ensemble, that it would be the first thing I would remove from the outfit.