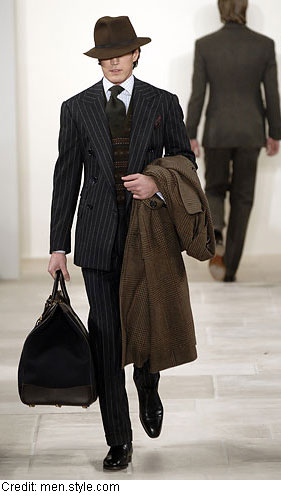 Ralph Lauren’s stock has been downgraded by Goldman Sachs to a ‘sell.’ RL, though very resistant to the worsening winds of the mighty economic storm that has claimed some of the world’s most recognisable corporations, is apparently not resistant enough to withstand the changes foreseen in consumer markets – notably that change from ‘aspirational’ to ‘desperational.’ However, despite the evident fallibility of Lauren’s stock in these markets, the company still has a reputation for drawing sales from an impressive inventory and for controlling company expenses in a truly Buffetian manner; a small example is Lauren’s reluctance in laying on extravagant shows, despite the financial success of his company.

Ralph Lauren menswear, which many credit as the most successful – aesthetically and financially – part of his empire, was shown on a New York runway in 2006, but it had been more than 30 years since it had last received such an audience; wedged between rows and rows of clapping celebrities, socialites and fashion luvvies.

Cynics comment that Lauren’s masculine creations deserve less of a runway parade and more of an entry into the ever expanding volumes of ‘classic’ (i.e. uninventive) menswear. ‘Leave the runway to real fashion’ shrill the most ruthlessly anti-Lauren of this group. I am rather disappointed by such sorry treatment, for Ralph Lauren claims no creative or avant-garde decorations; not for him the faddish honours bestowed on Thom Browne. Lauren produces good, solid clothing for gentlemen and sportsmen, often in materials and with a creative quality time has forgotten. His collections are honestly derivative.

Pictured outfit, an all time favourite of mine, captures the Lauren ‘magic’; the magic of reintroducing elements of menswear so elegant, so refined, one finds it hard to believe they ever went out of fashion. The suit, wide chalk striped and double breasted is a lesson in construction to those who feel capable of tackling the DB problems of reducing ‘boxyness.’ The lapels are wider than most contemporary cut for any suit, double breasted or otherwise. They also peak very much nearer to the shoulder. As I have noted with differentiating new and vintage evening tailcoats, this type of lapel actually makes the waist appear slimmer and the jacket in question seem rather more fitted; even tailored. The illusion, it seems, is that the shoulders seem rather wider.

However, unlike most off-the-rack double breasted suits, this Lauren version cuts in very slim at the waist, enabling it to be worn open (most non-tailored double breasted jackets manage to lose their elegance when unbuttoned). The addition of the Fair Isle jumper, probably sleeveless, adds a playful, merry touch to the smart but severe suit. I love the tie; the width particularly, as it bursts from the restriction of the jumper. The fedora’s position on the model’s head, the barely visible pocket square and the checked overcoat, draped over the model’s arm, lend an idea of early twentieth century romance to the ensemble; as though he were not pacing the runways, but platform 9 at Paddington, the steam puffing at his ankles. Very Richard Hannay.