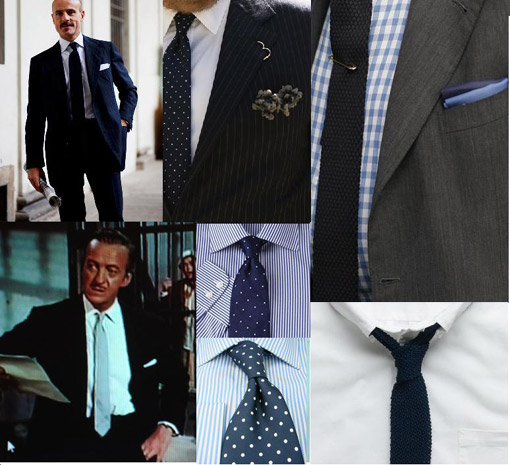 In very much the same vein as my last post, and placing myself in the position of the recent graduate on a limited budget, I thought I’d give my advice, for what it’s worth, on shirt and tie combinations.

As it happens I’m currently looking for a new job, and with a fresh start in mind I’m prompted to rationalise and focus my own endless supply of business shirts and ties. So this has proved an interesting exercise.

Let’s start at the beginning and assume you need a minimum of 5 shirts (one for each working day). The textbook advice would be to buy blue or grey suits and initially chose plain white and blue shirts. I’d certainly follow this rule with regard to suits. With regard to shirts, while the white shirt is the cornerstone of classic business dress, I’d find just white and blue shirts a bit too limiting and bit too safe.

On a budget, and assuming little in your existing inventory to build on, I’d suggest that what you want to achieve is the greatest variety of looks with the least number of items (these suggestions could also apply to business trips). To that end I’d buy two white shirts, one blue Bengal Stripe, one plain pink and one small gingham check in blue. Each will sit with a navy or grey suit admirably. Now to the matter of ties.

If the sartorial gods were to command that I be permitted just one tie during the course of my life then every time and without hesitation I would choose a navy silk knit. The Italians prove most ably the versatility of a plain blue tie, and knitted silk adds character, depth and just a touch of rakishness.

They would be cruel gods indeed to mandate just one tie, but despite howls of protest (I can here them now) I believe with the shirts already outlined you can get away with investing in just three ties. Our navy silk knit for one, a printed silk Navy white polka dot for two and the third is a plain silver in woven silk. Each tie will go with each shirt and either our blue or grey suit. Taking into account my hockey maths skills, that’s twelve possible shirt and tie combinations, more than ample to ensure that people don’t get too accustomed to your look.

And that I suggest is how to get twelve looks, in one week, from five shirts and three ties.