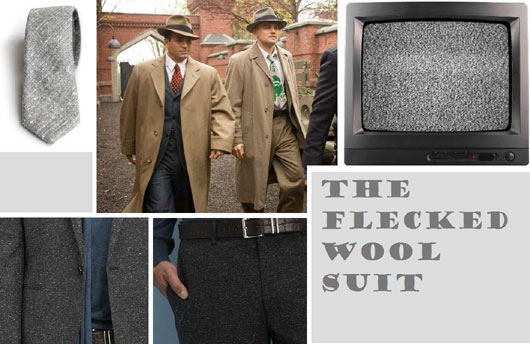 When I was trawling through the untidy racks at TopMan during a recent sale, I saw a suit in a fabric I had not seen since I had ventured into the loft at the old homestead many years ago when I was searching through my parents disused clothing for items of curiosity. Among the items of forgotten fashion I found, ransacking the hampers of garments from the last four decades of the twentieth century, was a suit in flecked wool; a dark grey with a textured pattern of white blimps. The suit in TopMan was almost identical in fabric, although rather different in cut; its reappearance was sadly only an accident of the high street store’s manufacture of 1980s nostalgia.

Flecked wool was not a 1980s invention, however its similarity to television static has earned it a closer connection with the era of televisual technology. Although it is difficult to find an exact history of the fabric’s origins, it has been in the swatch books of sartoria for nearly one hundred years as there are significant examples of flecked wool suits from the 20s and 30s that I have previously seen. The most popular period for the first ‘fashion’ flecked wool suits appears to be the 1950s. A recent viewing of Shutter Island, a psychological thriller set in the middle of the twentieth century, affirmed this view; Mark Ruffalo, chewing up the windswept scenery, wandered around in a trilby and a flecked wool suit.

It strikes me as a rather casual fabric, similar to tweed in texture and appearance. Younger people seemed to be rather averse to it, describing it as ‘rough’ and ‘looking like an old sack.’ I remember adopting such a viewpoint myself when all my clothing depended on trend – anything from the recent past was perversely horrible to my eyes; ‘It’s SO 80s!’ was a phrase that I was overly generous in distributing to worldly goods that did not meet my approval. Despite the fact that flecked wool was a fabric popular in the 1980s, I have somehow shaken off my dislike of it as I perceive the rough texture of the wool, and the rather distracting flecking, to be a perfect foil for smooth cotton shirts, rich silk ties and linen pocket squares.

I imagined the turned up flecked trousers flopping onto a pair of richly polished tan shoes, a pair of Wayfarers in the breast pocket of the jacket and a freshly ironed shirt underneath it all. There was something rather cool about it; something rather Gary Cooper.

The tragedy is that it isn’t much available anymore, at least not in ready-to-wear. I don’t imagine a huge amount of it is available at the tailors either as flecked wool is long out of vogue and it wouldn’t make sense to keep books of fabrics that just aren’t going to sell. When available, it is usually in a country colour such as a green or brown or in the more conventional town colour of mid-to dark grey. I think there is space in any gentleman’s wardrobe for this cool, characterful cloth.