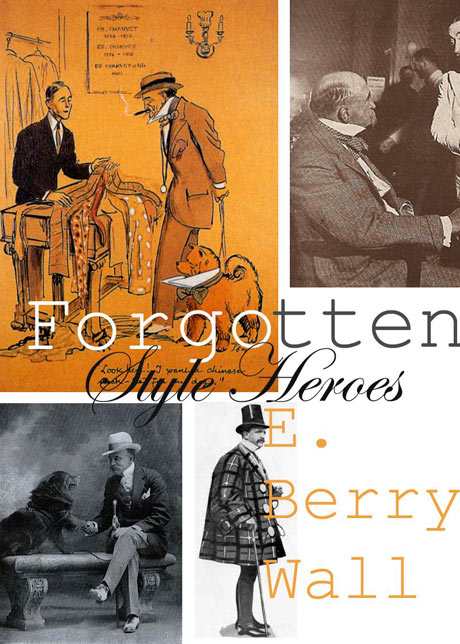 First there was the Dandy; then, there was the Dude. First there were trousers and riding jackets; then, there were thigh high boots and Glen Plaid pantaloons. Although they could not be more stylistically opposed, the Dandy and the Dude do share the taste for rebellion; the former against the unwashed, perfumed and bewigged fashions of fops; the latter against the plain, austere façade of Victorian respectability. But though the Dandy is celebrated for his overturning of strange fashions that are anathema to all modern men, the Dude has been largely ignored; his extravagant, carriage-stopping ensembles have faded into the past; the heroes of the movement forgotten.

Even the “King of the Dudes” Evander Berry Wall – a great celebrity in his day – is barely acknowledged in style’s hall of fame. Born in 1860, E. Berry Wall – ‘Evander’ was rarely used – was a fortunate young man. He inherited a large sum of money from both his father and grandfather before reaching the age of 22. A young millionaire, Wall used his fortune to assemble a colossal wardrobe that would eventually include 5,000 neckties and 500 complete changes. In Wall’s great variety of ensembles he is said to have possessed the most colourful and extravagantly patterned suits in New York. Unlike the Dandy Brummell, the Dude Berry Wall sought attention and recognition. You can imagine him paraphrasing the Beau’s famous line: “If Joe Public doesn’t turn around and look at you…you’re not worth looking at.”

It was Wall’s taste for experimentation and his patronage of Henry Poole that led to his most famous achievement; wearing the short dinner jacket in public. The story goes that Poole’s most illustrious customer, the Prince of Wales and later Edward VII, had a short jacket made and had worn it instead of an evening tailcoat on a number of private and public occasions. Poole sent one to Wall and suggested it be worn “for a quiet dinner at home or an evening’s entertainment at a summer resort.” Though a wealthy and socially accepted personage, Wall was not a royal prince or the heir to a vast empire; he may have affected to set the fashion but he could not have set the tone. Thus, his jacket’s first public outing at a ball in Saratoga was met with consternation. The manager of the Grand Union Hotel in Saratoga ordered him from the floor and, apparently, only permitted him to return after he had returned to his room and changed into an evening tailcoat.

Such sartorial squeamishness was widespread. At the time, New York society, as Edith Wharton and others have famously documented, was not a place for pioneers of fashion. After amusing escapades including one involving a reporter’s thirst for a good story, a “Battle of the Dudes” and a pair of black patent leather thigh boots, Wall went bankrupt in 1899 after a foray into investing on Wall Street. The resulting social isolation and embarrassment led to his departure for Paris. Wall’s own reasoning was that New York had “become fit only for businessmen.”

In Paris, he permitted himself the comfort of an apartment at the Hotel Meurice, near Charvet who had long been supplying him with his famous high starched collars. He extended the elegance of Charvet collars to his chow, who strutted with his master through the Place Vendome to the Ritz Hotel, where Wall’s patronage was well noted. Devoted to his wife and his pooch, Wall is often unfairly pilloried as a profligate and self-indulgent poseur. He was extravagant, but it is said that his life brought him great happiness and that he remained a fixture of continental society until he died in the spring of 1940 at the age of 80. Wall often credited his diet of champagne and his avoidance of physicians for his longevity, quipping: “There are more old drunkards than old doctors.”