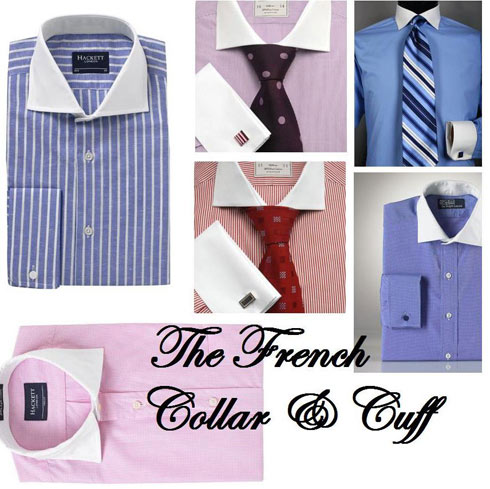 “Men should only wear those” remarked an acquaintance “when they’re over forty.” He flicked his finger nonchalantly at a charming ‘French’ shirt (white collar and cuffs). I disagreed with him on the basis that youth is a perfectly acceptable, and often most appropriate, period in which to explore style to the fullest.

I very much like French collars and cuffs. I like the smart white ‘framing’ of the shirt colour or pattern; they are reassuringly formal. They are not all worn correctly. Some people have a tendency to buy an extremely large collar size and, due to the white accentuation, this has the rather sad effect of making a man look like a matchstick with a Polo mint; others wear them without jackets and while this look is largely inoffensive, it is not using the qualities of the shirt to best effect. A French shirt without jacket, billowing in the wind, can make the shirt cuffs look more like rigid manacles if it is the standard fit of shirt.

Another mistake which is made is to assume that this shirt is only for formal wear; for a wedding, or a terribly important meeting. Some men who purchase them retain them for such purposes and such purposes alone and, in doing so miss out on the fun (yes, fun) of wearing such a shirt on less formal occasions.

To open the French shirt at the neck is not the most traditional or conservative method. Most might prefer a tie but in fact, the French shirt, with the crisp white contrast is enough of a decoration in itself.

Wearing it with a neck scarf, of linen for summer perhaps and of silk for winter, is particularly eye-catching; the white collar and ruffles of a cravat appear made for each other, so natural is the harmony. While a mid to light blue is the most popular colour – a representation of two of the Tricolore – there are other colours and patterns, flattered by the ‘touch of white’ in the French shirt. Lilac, light pink and stripes are complemented very well in the context of a French shirt.

Although they are currently a fashion item, they are not as widely available as one might hope. Even Jermyn Street assistants stare at me blankly when I request examples of them. They are around and, increasingly, are manufactured without white cuffs – Hackett and Ralph Lauren examples found are all sans white cuff.

I discovered a curious blog article written, clearly with a sense of humour, denigrating the shirt as one worn by ‘assholes’; mentions were made of Gordon Gekko and Bill Lumbergh (from ‘Office Space’) as prime examples of the type of man, or monster, who would wear such an item; brash and feared rather than respected. The apparent connotations for the wearer are of disreputable and unpleasant characters; selfish, greedy, manipulative men epitomised, in the eyes of many, by the character of Patrick Bateman; the sick, greedy and lunatic serial killer creation of Bret Easton Ellis.

I think it rather a shame that this is such a popular opinion. The heritage of the shirt itself is more apparent from the French shirt. It is a reminder of the past; that collars used to be detachable – an era of delightful prim and fuss. To me it speaks not of boozy brokers and sleazy executives but of an old world charm: of high starch and clean Edwardian lines. White adds sparkle and a sense of cleanliness marvellously well, while at the same time enriching and ennobling the colour juxtaposed.