Why The Fuss: The Trouble With High Fashion 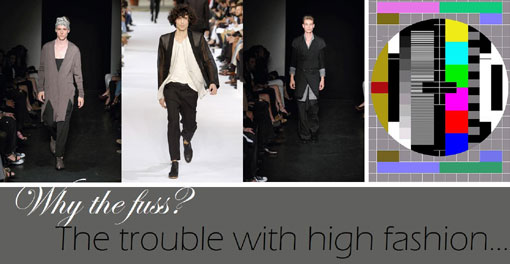 It was a moment of dewy-eyed ecstasy; an elderly relative of mine, transfixed by a high definition broadcast of an expensively produced and visually breathtaking nature program. The brilliance of it seemed almost too much for a person who, in their youth, had first known television as a gigantic box with a tiny black and white screen. As they enthused about how wonderful the colours and the detail were, I considered the transformation of the format in his lifetime; from analogue to digital, from a tiny screen to a truly massive one, from CRT to LED and, crucially, from black and white to full colour.

I don’t know of a single person who longs for a black and white world. The presence of colour is one of the most fantastic accidents of life that I strive to appreciate far more than I actually do. I could see sitting next to my teary relation, who pointed and smiled with childlike joy, that the gift of vivid colour is truly marvellous. Colour is present in virtually every memory of beauty, both of celebration and regret; the bubblegum pink sunset from the terrace, the reddened tear stained cheek of a weeping child, the first blue-sky morning of Spring, a single blood red rose on a mossy gravestone.

You would think, given such treasures of inspiration, that the creatives in men’s high fashion would produce styles which reflect the gorgeousness and brilliance of colour on Mother Earth. You would assume that the vaunted corridors of the grand French houses were torrents of vivid colour; experimental clothiers excitedly dashing back and forth with garish greens, brilliant blues, rusty reds, yolky yellows, princely purples and ochre oranges, forming psychedelic arteries, feeding the colourful whimsy of fashion’s Willy Wonka. Your assumption would be presumptuous.

In fact, the houses of Dior Homme, Yves Saint Laurent and the like are so far from this bounty of colour and happiness that it makes one wonder whether their points of inspiration are not the leaden skies of London, so monotonously monochromatic are their ‘collections.’ The ‘boys’ in Dior’s recent spring/summer collection did not seem the kind of happy-go-lucky chaps who spend a weekend at their aunts in Kent, ask some friendly girls out for a punt, get sozzled on vintage champagne and then sing till the early hours in the flower beds with a view of the stars – in other words, the kind of privileged audience some fashion designers would hope to appeal to. In actual fact, they appeared more like underfed, underpaid goons from some science-fiction Orwellian netherworld where it is never sunny, where smiles are outlawed and where colour-vision has been brutally removed from every citizen’s retina.

I find it absolutely exasperating that men’s high fashion, instead of being the leading, shining example to us all of positive, beautiful and colourful expression, churns out such depressing dreck. In an age where men are permitted to ‘peacock out’, when we have long since shrugged off the infuriating sombre blackness of Victorian propriety, the ‘talent’ that reigns in some of the greatest and most influential halls of fashion fame seems intent on pushing out the same garb, entirely irrespective of season; a collection wholly composed of boring black, weary white and grisly grey.