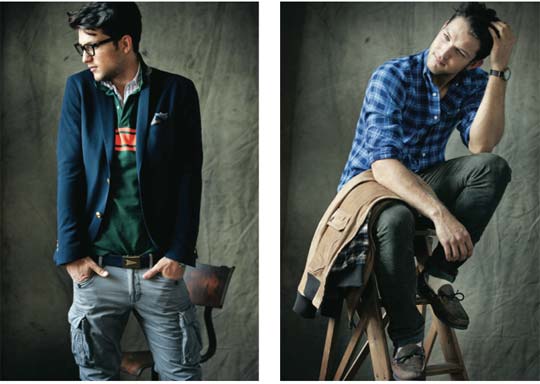 They don’t like the Ivy League jumpers, the bow ties, the Nantucket chinos or the Fair Isle sweaters. And it’s not because they work for Ralph Lauren’s legal team.

It’s because it’s all a bit too conservative for them, a bit too refined – perhaps a bit too perfect. I know plenty of people who are turned off by it. It’s ‘not edgy enough’, ‘too derivative’ or ‘old fashioned.’ It isn’t ‘street ready’ or ‘cool.’ For them, classic style is all very well but it can’t be a generic, conformist uniform.

Known for being Bergdorf Goodman’s men’s fashion director for five years, Bastian’s reincarnation as a designer for his own brand and for brands like Gant isn’t yet a decade old and yet he has carved a bit of a niche as a dabbler; part designer, part clothing-historian. His inspirations are often abstract and quirky and the results quirkier still, but he has been working with the Gant brand for the last three years – run by slick-backed straight-laced Swedes – so he must have been doing something right.

I had an opportunity to see his work for the fall-winter collection at a recent press day. It was the first warm day since September last year and, to be honest, I had lost my appetite for cold-weather clothing. As I marched down a sun-drenched Brompton Road, my mind wandered back to my first Gant purchase; a pair of striped swimshorts, bought during school holidays. This was the Gant I knew best; the summer Gant. Seersucker, linen jackets, madras ties and pastel chinos. I didn’t want to see rugby shirts, puffer jackets, scarves or jumpers.

However, Bastian’s collection is a bit different. You can’t tell that it’s Gant at all. There are none of the saturated knits, pastel Oxford cloths or clubby accessories. There’s something worn and ever so slightly tragic about it, like unfulfilled dreams.

This particular collection was inspired by the American artist Norman Rockwell, who is most famous for his illustrations for the Saturday Evening Post. Although more than a mere illustrator, it is apt to draw comparisons with JC Leyendecker who is most famous for his exquisite Arrow collar adverts, depicting the carefree lives of an elegant 20th century elite. Rockwell, by comparison, is noted for portraying the tribulations of the less celebrated elements of America, particularly the working class everyman.

Bastian’s collection is an homage to the everyman, contrasting with the Ivy League playboys that are associated with the style of Gant. There are no delicate Fitzgeraldian anti-heroes in Bastian’s MB leather jacket; this is highway Americana in all it’s diesel-fumed glory, freedom with a tinge of disappointment. There are some classic Gant items – but they all have a Bastian touch; a navy hopsack blazer with brass buttons has unusual squared corduroy elbow patches.

It’s not preppy but it’s not anti-preppy – it’s professorial yet rebellious, a mixture of student and teacher. And, unlike the rest of Gant, it has an aesthetic appeal beyond the ivy-clad walls of America’s oldest educational establishments. Bastian’s Gant world is distinctly harsher, colder and less perfect.