Getting the Jacket Length Right

Since my first bespoke suit, several years ago, my tastes have evolved through a process of trial and error, making it very clear what suits me and what does not. I found an old Moleskin diary the other day and there, sandwiched between a retrospectively embarassing, studenty attempt at a poem and a rather short and unimaginative list of possible careers upon graduation, I found an interesting entry.

It was an bullet-point list (alongside a fairly impressive – if I do say so, myself! –  freehand sketch) of all the features I wanted in my very first bespoke suit, excitedly written in advance of meeting my tailor for the first time.  Many of those features – waisted jacket, charcoal grey fabric, working buttons etc. – have not changed; but a couple have and each has a dramatic effect on the overall appearance of the suit. One such example is the length of the jacket – an area that is utterly crucial to get right and doubly so for those noticably above or below average height. 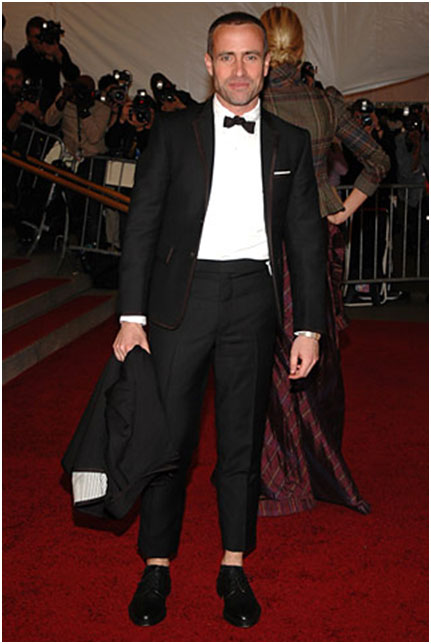 Short jackets are very  much in vogue with many of the menswear designer labels at the moment and have been for the last two to three years. Thom Browne (above) is perhaps the most famous proponent of  this ‘shrunken jacket’ look but, even on the highstreet, most jackets are cut short. The idea is that it makes you look taller: the jacket finishes higher on the trouser, leaving more leg showing which gives the illusion of lank. This probably works – to a degree: an overlong jacket will certainly render its wearer shorter to the average eye. The other idea behind this look is that it gives the jacket a casual air.

Yet, when I tried on my original bespoke jacket, after re-reading my diary entry, even the opiod cloud of nostalgia was not enough to blind me to the fact that my jacket – although not without merit – was probably not something I’d want to wear today.  You see, the trade-off with a short jacket is that, by shortening, you invariably make the jacket boxier as a result of its being shorter in length whilst the shoulders remain the same width as they would on a regular-length jacket. This is not a flattering aesthetic and – especially if you go very short as Thom Browne has above – is one which can imbue the jacket with the slightly clownlike quality of an awkward schoolchild wearing clothes they’ve outgrown – not the look most of us desire.

The oft-written rule-of-thumb vis-à-vis jacket length is that, with your arms hanging loosely by your sides, your fingers should curl up naturally around the bottom of your jacket. Of course this is just a rough guide and the best solution will vary from person to person. The one inviolable rule – which is, of course, violated oh-so often and with eye-catchingly vulgar panache – is that the vents on the back of the jacket should completely cover your posterior. I think that’s a must. 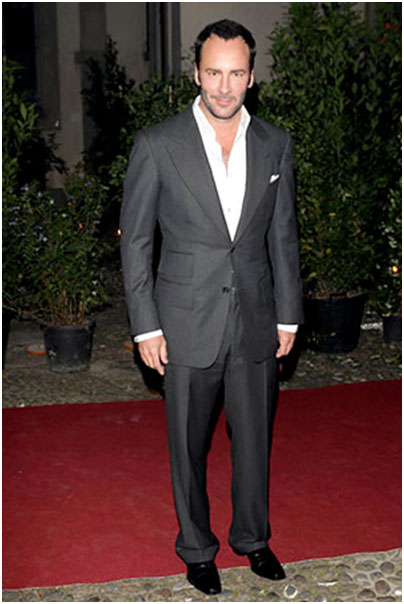 Also from ‘that’ side of the Atlantic, of the same Christian name but a graduate of a rather different school of thought, as far as the suit goes, I give you Tom Ford (above). In this photo, his suit looks just the right length to my humbly observing eyes: the broad shoulders are counterbalanced by a medium-long jacket whose length permits the tailor to give the item more shape and definition without ruining the trouser-jacket proportion.

As with most things discussed on this website, it is simply a matter of taste: but I find myself having most definitely changed camps on this and consider it very unlikely that I’ll ever start asking for short jackets again. Indeed, I often see men at work whose jackets are clearly bespoke and think to myself that they’ve ruined what is otherwise a very fine jacket by having had it cut two inches too short!

What are your thoughts? Have I missed something?