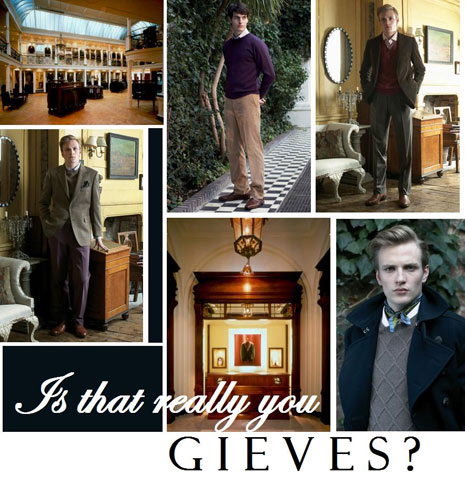 “You really should” someone told me “check out Gieves & Hawkes these days. They’ve got some interesting things and they’re trying to appeal to a sort of… younger generation.” Warning sirens started to sound. An ancient, world famous tailor? Clothier of some of the most colourful characters in military history? Having to appeal to a younger generation? “What on earth for?” I pondered. I decided to follow the advice and wander in on one of my regular trips to Regent Street. On entering the large and attractive emporium of Gieves & Hawkes I got the distinct impression that custom was somehow lacking on that particular day. The ratio of staff to customers was something approaching that of a penthouse suite. Evading the usual questions inflicted on unrecognised clientele I asked for the ready-to-wear fashion sections. I was led through glorious columns, ‘neath lanterns and chandeliers to a quiet section of the store that looked rather like Ralph Lauren or a more upmarket Massimo Dutti.

There were a vast number of jackets in particular colour palettes; browns and greens for autumn, some navy blues and reds and there was also some knitwear nearby in a predictable variety of complementary colours. Investigating the jackets, some tweed, some moleskin and some corduroy I decided that I must have been led to the correct part of the store. I slipped on a navy moleskin in my size and wandered over to the cheval mirror. “Too big” I muttered to myself. “It’s a lovely jacket isn’t it?” I heard a voice behind me. Caught. Confound it. “And such a lovely colour too.” I was rather stupefied by this follow up. Had I, in some delusional state, wandered out of Savile Row into one of the emporiums on Bond Street, where such simple and directionless obsequiousness is practically a disease among the sales assistants? It seemed wrong for a Gieves assistant to behave in the same way; it clanged. The mahogany cabinets, creamy columns and wrought iron were all for nothing; I might as well have walked into Armani. I agreed, naturally, that it was an attractive colour but that the jacket was a little on the large side. I knew the response before my last words had left my lips; “We could always adjust it for you” the assistant replied “because, we are tailors as well.” You don’t say.

On the design side, Gieves really need to start bashing their heads together if they’re trying to appeal to a younger generation (although that could easily mean anyone below 50 on Savile Row). There was something Boden-esque about some of the clothing and, though well constructed and substantial, was rather expensive. A lot of it seemed the sort of thing a prematurely aging 35 year old might treat himself to on the occasion of a promotion, wear to the Old New Inn at Bourton-on-the-Water and point to the label eagerly; “Look, Gieves and Hawkes. Savile Row.” A few items are interesting and occasionally wonderful, particularly in terms of fabric or colour choice but there is a great deal lacking. To say that Gieves treads cautiously is tremendous understatement. I cannot quite see how my acquaintance was of the opinion that Gieves was attempting to focus on younger customers. Aside from the young men in the advertising photography, I have seen no gentleman of noticeable youth in any such attire. With their name, heritage and address – all things which innovative men’s designers would kill for as they simply cannot be bought or even earned in less than 200 years – Gieves could be so much more than they are.