Give That Man a Job 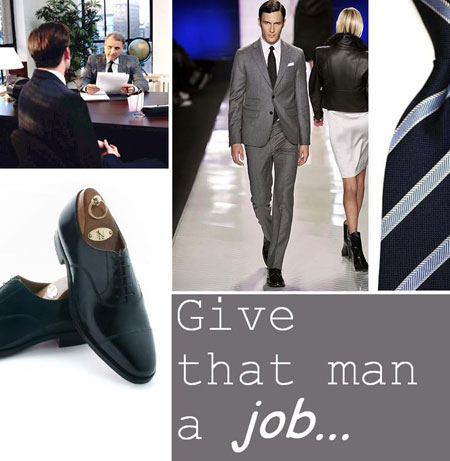 It is a truth universally acknowledged that a gentleman in possession of good style should be in want of an appropriate career. However, it is not always that gentlemen of taste end up in the most fitting positions; some labour away in environments and with schedules that seem inconsistent with their particular perspective on the world. Though he might toil, such toil might seem fruitless and alien. Through his determination and strong imagination, he might chance upon an opportunity; from this opportunity, he might contrive a new position and he may be called upon to present himself before an individual, or perhaps a panel of judges, who will not only listen but also observe his manner, his character and inevitably, his appearance.

Most men of style may be fairly confident of maintaining a manner appropriate for the expectance the individual or panel judge might hypothesise, they might also be rather bluff about the scrutiny of their character, reasoning that a man of idiosyncratic style necessarily possesses lashings of character. On the final, superficial matter of appearance, the man of style may wave away caution and counsel with a hearty and slightly disbelieving chuckle; “Good Lord, the one area I should be relied upon to dazzle!”

However, it is this cocksure dismissal of guidance that represents a man most in need of restraint; the way one wears clothing is not only considered a positive expression of talent, flair and knowledge. It can also be considered merely decorative, distracting and denoting a man lacking direction. Smartness is one thing, but intimidate possible employers and you might scupper your chances.

A flair for restraint

One of the things I have always been told by employers is that focus and drive are two of the most important traits interviewers search for when inspecting prospective employees; “After basic qualifications” a lawyer once told me “we observe and question looking for potential.” Anyone too precocious in knowledge or dress might be considered, in equal measure, a poseur or a swellhead; few jobs require Narcissi so even if your self-tutored style is aesthetically appealing and artistic, it’s time to play ‘out of character’ – but not fully. If you are prone to pocket squares, by all means wear one but avoid posy pretensions; fold or scrunch it neatly and inconspicuously. Ties should be darker, and with plainer more conservative patterns; psychedelic paisley may be wonderful, but it can distract an employers eyes, and therefore mind, from your ingenuous ramblings on working with charities in Africa.

Good but not your ‘best’

Some people might believe I would wear my ‘best’ suit to a job interview – to create the best impression, to be ‘remembered’; however, being remembered as the lad in the ‘lovely tailored suit’ may not go down well when the selection procedure is furthered. Whilst others might be remembered for their earnestness, wide vocabulary or attractive self-confidence, you might only be remembered for the beauty of your costume. The suit should be a good suit, no question. I would frequently favour a single breasted medium-grey suit – black looks cheap and, should there be nervous scratchings of the head, shows up snowfall-dandruff on the lapels. Whilst I have many unique shirts such as French collared pinks and lilacs, interesting checks and stripes, a light plain shirt is versatile and lacks the distraction-factor.

The one sartorial area to really captivate the employer by revealing a caring and dedicated character is in footwear; men frequently wear ghastly shoes, at least they do in London, and in an interview, wearing incorrect, scruffy or badly kept footwear can sometimes be a deal-breaker. “Women really do judge a man by his shoes – it shows whether he cares or not” a friend once told me, and it seems to be true; the first thing female colleagues notice on me are my shoes and when I asked one of them if they could remember five or six pairs that I owned, they reeled through eight or nine from memory. This is not only an area to excel in if the interviewer happens to be female, it is also advisable for the inevitable comparisons with other prospective employees; well cleaned and polished black Oxfords with neatly tied, non-fraying laces (make the bows small) make a serious statement, especially when they are flashed in a confident crossing of the legs.