Going Against The Grain 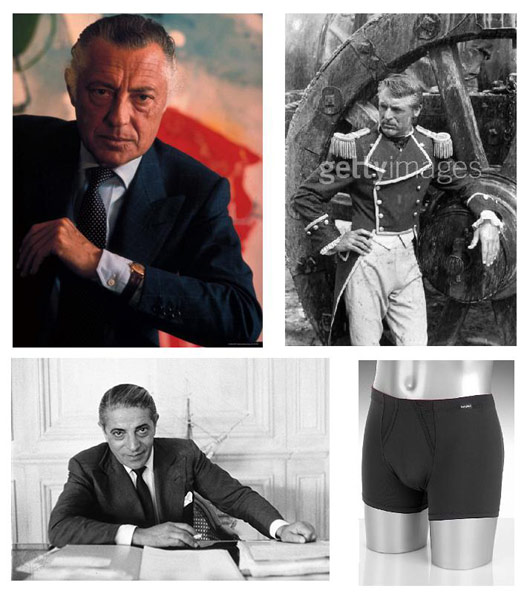 Many of the great dressers had curious quirks. For example, according to Francois Chaille, the bespoke ties of Aristotle Onassis were tailored from more than six feet of fabric – one and half times the regular length. This was so he could wrap them around his neck twice.  Perhaps the most famous sartorial quirk of all time was Gianni Agnelli’s habit of wearing his watch over the cuff of his shirt. What is less well known is that this wasn’t merely an act of mere sprezzatura but the result of being allergic to the metal in his watch.

Now, apologies to anybody sitting down to a plate of sausages or about to much on a lunchtime Hot Dog, but I’ve been convalescing from a rather painful operation in the locality of the family jewels. Time on the couch offered an opportunity to re-read Richard Torregrossa’s excellent book ‘Cary Grant: A Celebration of Style

’– you can read my review in my next post.

One of the more interesting facts that Torregrossa reveals is that Grant didn’t wear boxer shorts or briefs but instead preferred women’s nylon knickers, something he confessed to in an interview with Esquire in 1960. His reasons were superbly practical, for not only did they keep everything in good order, but they were “cooler than men’s underwear and they’re so much easier to wash”.   Grant was a notoriously light packer and he could wash his underwear at night and wear them again next day. Aside form these features, they flattered a man’s anatomy and were very much more comfortable.

How does this ditty relate to me and my op? Well, the need to find comfort in the aftermath of my operation led me to have a Grant moment of my own. A step short of women’s nylon knickers, my salvation came in the form of Micro-Skin trunks from UK high-street retailer Marks and Spencer.  As much as I love my proper boxers, and have written as much before, they just weren’t up to the job, and positively encumbered the healing process. What I found and settled upon was an anathema to everything I believe in, but I suddenly saw where Grant was going. Not only are they comfortable beyond description, with cleverly placed soft seams and support that is akin to a second skin, I’ve noticed that trousers lie and fall much better. In fact, in this regard the difference between these and even better made boxers is remarkable – and it’s an understatement to say they went down well with the girlfriend. In fact I’m half tempted to start giving these as gifts to people.

The world of men’s clothing is full of rules and standards of good form. For the most part it’s wise to follow these strictures, but just occasionally going against the grain makes sense.