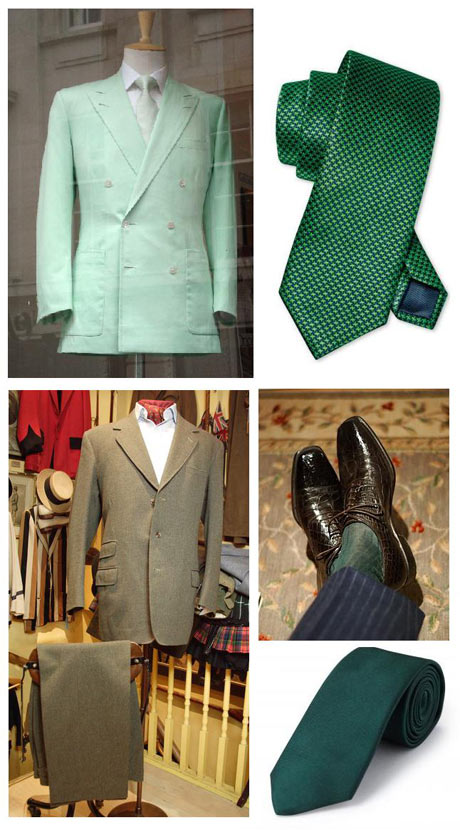 I’ve decided I’m going green. An unusual pronouncement for a former policy advisor on aviation, so perhaps I ought to qualify that statement.

Of all the colours present in my wardrobe green is conspicuous by its absence. Why I’ve omitted this colour I’m not sure. I’ve spoken to many a shirt maker and clothing retailer, all concur that it is not a colour favoured by many men. On the whole when we think of adding colour to our wardrobe it seems green figures low on the list. True, it’s a common enough colour for those that stalk the countryside, particularly in its favoured guise of a Barbour jacket and wellington boots, but outside of that you don’t see it too often.

And yet it is an eminently useful colour, suitable in one shade or another for almost any complexion. If you’re dark haired or dark skinned then look to darker shades of green – British Racing Green, bottle green and their like. If you have fair skin and fair hair then consider lighter shades such as mint and moss.

It’s also a colour that is more than a little apt for the season of holly, fern trees and the rich dark browns of autumn and winter. And as colours go it’s perfectly versatile, sitting well with most blues, pinks, browns and its variants – rust, beige and terracotta.

For my own part I’ve decided to have made what I call a town tweed odd jacket. I call it town tweed because instead of the more common single breasted guise for tweed jacketing I’m having it made in a double breasted form with patch pockets. Tweeds tend to be rather heavy and normally you wouldn’t contemplate a double breasted jacket. However, living in London and moving from building to building via covered walkways, underground and covered train stations you can actually dispense with a coat in all but heaviest rain, provided your jacket is weighty enough to keep you warm. If it does rain I’ll be able to use a Mac rather than carry around a heavy wet woollen coat.

I’ve opted for a Herringbone Harris Tweed in mid/moss green. If green jacketing is a little bold for you then start small. A green stripe shirt works wonders with a blue blazer and club stripe tie. Alternatively, if you’re attempting to add colour to your sock collection then green works wonders with a navy suit and black or brown shoes.