Are You Going Out In That 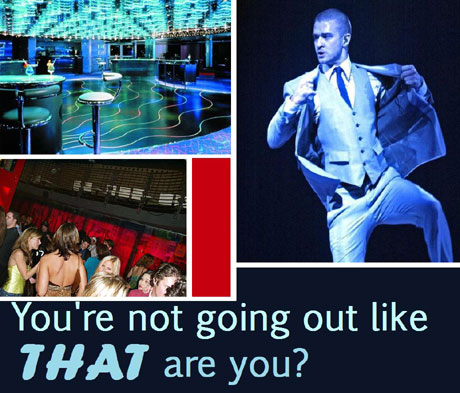 I am often asked this question; “What do you wear when you go out?”

Why am I asked such a question? Chiefly, because my particular inclinations (bow ties, paisley pocket squares and fuss) do not seem to marry with the idea of what that particular person considers ‘going out’ clothing. ‘Going out’ is unambiguous code for late night bar-hopping, clubbing, guest list queues and almost any activity past 6 in the evening that involves the purchase and consumption of alcohol and the ‘musical’ assailing of the ears.

For women, ‘going out’ is frankly ceremonial. Hours before departure, dresses are trialled with necklaces, shoes, bags, bracelets and boleros. Make-up is invariably applied, hair remarkably coiffed, skin moisturised and nails shining. Men make no such effort. In fact, men often make no distinction between day wear and evening wear at all. This is largely because the line between the two has blurred considerably, but also because eveningwear used to be so easy for the poor, uninterested male. All he needed was a few white evening shirts, a black bow tie and a dinner suit. He never cultivated alternatives or variations as women did. As stiff and as formal as it sounds, black tie was perfect for the man who didn’t care.

These days, he has the misfortune of choice. The most common dilemma is ‘Which clean shirt shall I wear?’ followed by ‘Which jeans match smell the best?’ For the shirt, usually untucked, worn with jeans is by far the most common ‘going out’ ensemble for men in my neck of the woods. I cannot stand it. It lacks invention. It lacks presence. Although, I admit, it is rather perfect for the environments in which it is often seen – dark, cramped, sweaty clubs that remind me more of a musical Tube ride at rush hour than an MTV video set.

Although I would always encourage a gentleman to wear the clothing he feels most comfortable in, even if this be tweed n’ cords, I always adjust my signature a little when I venture out for a ‘hit’ of nightlife. I tend to tone down; bright clashes of colour that work well in the sunlight have little effect in the gloom of a club. Also, I tend to work with more monochromatic colours – greys, white, black, navy blue – and stay away from brown. Colour and flourish added can be rather simple. Ties, if I wear them, tend to be simpler and stronger in contrast if patterned. If I go without a tie, I invariably add a silk pocket square. Silhouette is always important but at night it is particularly pertinent as less detail is on display; ergo, trousers should be flatteringly slim and jackets short.

I also think playing with texture is more important than playing with colour subtleties; the odd patent belt, velvet jacket or slub-silk trouser adds depth. The best thing is, ‘going out’ clothing is far easier for the male to achieve as so much of it can be borrowed from what is considered to be his ‘work wardrobe.’ For that ease of transition, the male is envied.