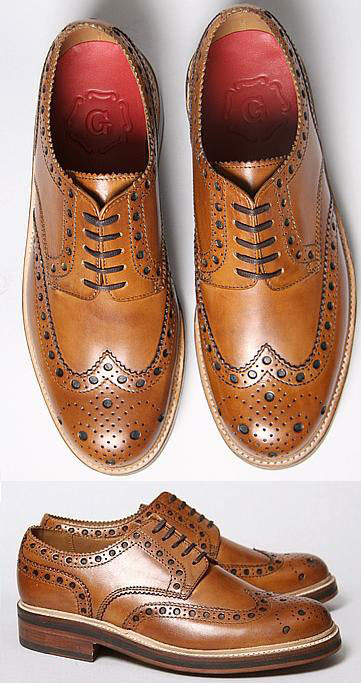 I’m on something of a shoe riff at the moment. This is partly because I’m trying to get back to my fighting weight, and shoes are the only things I’m allowing myself to buy until then.

Suffice to say, every year I draw up a list of items I wish to add to my wardrobe. At the top of that list is the Grenson Archie wingtip punch brogue . Curiously, the shoe appeared last season but happily they’ve reissued it and added some more colours to the mix. Not terribly suited to last season in my view, it is, however, a perfect winter shoe.

Good Year Welted, full grain leather and cut on a wide last its heft gives it a purposeful look, as do the large punch holes. This is added to by the double leather sole, which will provide protection from the winter rain. Certainly not a shoe to be warn with suiting, it is ideal for denim, cord, thick knits and all the other accoutrements of a well set casual winter wardrobe.

My favourites are the chestnut versions above, with that distinctive cream inlay to the stitching. But various websites are carrying them and they’ve been issued in black and dark brown/chocolate.

Until very recently Grenson was eclipsed by the likes of Church’s, Crocket & Jones and Tricker’s. While being sound, Good Year Welted and bench made in Northampton, they never quite achieved the reputation of the latter three. Sound but uninspiring would probably sum it up well.

Since the firm’s take over by City financier James Purslow in 2004, Grenson has enjoyed a real renaissance, and deservedly so. Bringing in London shoe designer Tim Little – who has had some success in his own right – they started pitching a new range of shoes to a slightly younger market. Echoing the company’s traditional designs, subtle tweaks provide a more modern edge.

So complete is the revival that new, young, independent retailers have been engaging Grenson for some interesting collaborations. But the Archie is top of my list for now.