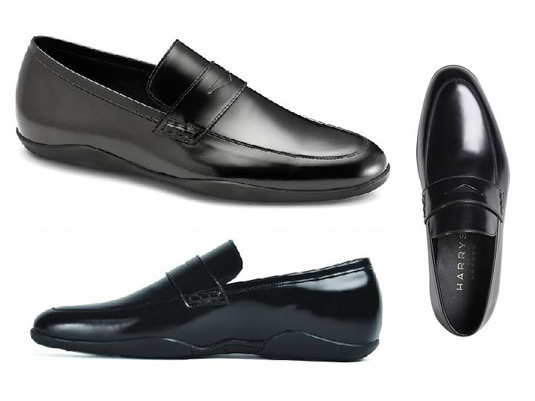 Saturday was somewhat chaotic here in London. Mass demonstrations against government cutbacks lead to large portions of London, from Oxford Street to Jermyn Street, being pedestrian only zones. I’ll confess it’s something I wouldn’t mind seeing a bit more of – pedestrian zoning, not demonstrations.

In a bid to get to from Regent Street to Jermyn Street and avoid the nexus of demonstrators in Piccadilly Circus I took a stroll through the Burlington Arcade. This Regency covered thoroughfare is home to a range of luxury retailers stocking everything from vintage pens and Rolex Watches to cashmere and leather goods. It’s worth a visit when next you come to London.

It was here that I was also afforded my first proper look at innovative shoe designers Harrys of London. I’ve kept an eye on this retailer over the last three or four years and regularly flick through their online store. But until Saturday I’d never taken the time to see the shoes in the flesh. My hesitation comes from the fact I just can’t make up my mind about them.

I’m resolved that I like the designs – classics with a modern high tech twist is probably the best way to describe them. The one that fascinates me in particular is the Downing Loafer in gloss calf skin with the ‘Windsurf’ sole. As the name suggests, the design of the sole is based on the footwear of windsurfers, this is then attached to an elegantly shaped loafer. Quirkiness doesn’t usually deter me; I’m a fairly broadminded sort, and I have an individual style – although I’m still not bold enough to go for the brightly coloured soles.

They’re not cheap, but they’re comparable in price to other shoes I’ve bought. But I just can’t bring myself to part with the cash.

If you tell me a shoe is all leather, bench made, Goodyear Welted and from the venerable shoemaking Mecca of Northampton I know what you mean, I can understand the value and I’ll pony up the dough. And despite being sceptical at first I’m now a convert to Parisian shoemakers Berluti. I can understand the cost see the value and if I had the money I’d spend it. In both cases I can understand the ratio of cost vs value, and of course they conform to classic ideas of style and traditional craftsmanship. Conversely, spending nearly £300, and more in some cases, on shoes with plastic soles goes against every thing I know. Where Harrys of London stumps me is that I’m really not sure whether I’d be buying into some chaps clever marketing wheeze or a genuinely modern high tech improvement to an age old craft. And so I think it’s time I interviewed these people, and settled the matter once and for all.

Amazing what an afternoon constitutional can do for you.