Over the weekend I popped in to see my shirt maker Erlend at Stephan Haroutunian Shirts – now shortened to Stephan Shirts, presumably because no one can pronounce the surname. It is a bit of a mouthful.

One of the nice things about what I do is that many of the people who run the independent menswear retailers I highlight eventually become friends. A shopping trip often results in a pleasurable few hours chewing the cud.

On this particular visit Erlend told me of a new client he’d recently taken on by the name of Adam Atkinson, who turns out to be a rather interesting fellow.

Adam is the founder of CHERCHBI which began in 2007 with an idea to make bags using wool from the ancient rare-breed Herdwick. As it turns out the fleece is considered almost worthless and is most often burned. Apparently, Herdwicks have a 1,000-year heritage and a reputation as Britain’s hardiest mountain sheep. It took four years of trial and error and nine weave trials to create Herdwyck No.10, the distinctive pure wool fleece which when bonded with cotton and natural rubber forms the basis of these distinctive bags. That beautifully rich colourway and waterproof textured cloth is the result of this distinctive fleece. 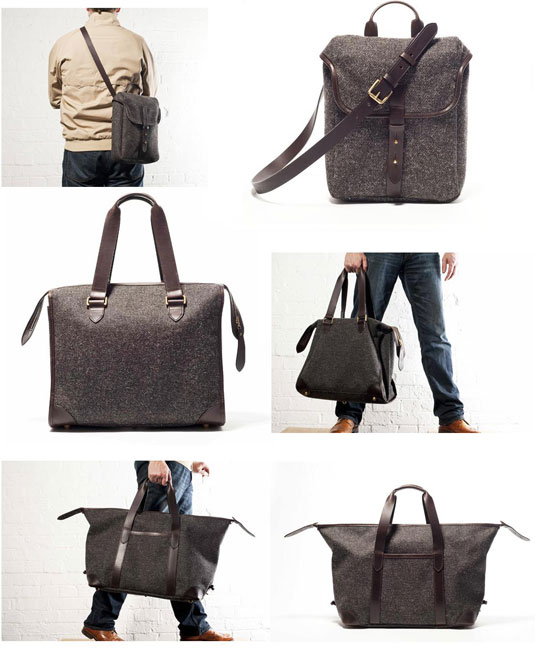 Adam displayed the collection recently at Pitt Uomo and according to the website it officially launches this Autumn – although you can currently buy their bags online.

What I’ve so far seen, and all I’ve read, I’m really impressed. The wonderfully organic look to the bags, provided by that distinctive fleece, is backed up with an extraordinary attention to detail and British craftsmanship. Cow hides are sourced from Northern Ireland, which are then pit-tanned using vegetable tannins. The traditional English leather work is done by Joseph Clayton of Chesterfield, Derbyshire. In fact, all the manufacturing is done in Britain, right down to the brass metal wear which is cast in England. The only exception to this being the zips, which are Swiss-made Riri zips –unfortunately there are no UK zip makers left. I love all this detail.

The designs are simple and practical, but then with that distinctive fleece anything more would be a distraction. They have a robust, organic feel which makes them an entirely adult option which adds character and texture to your look.

This is one to watch, and proves that you should always make friends with your tailor.