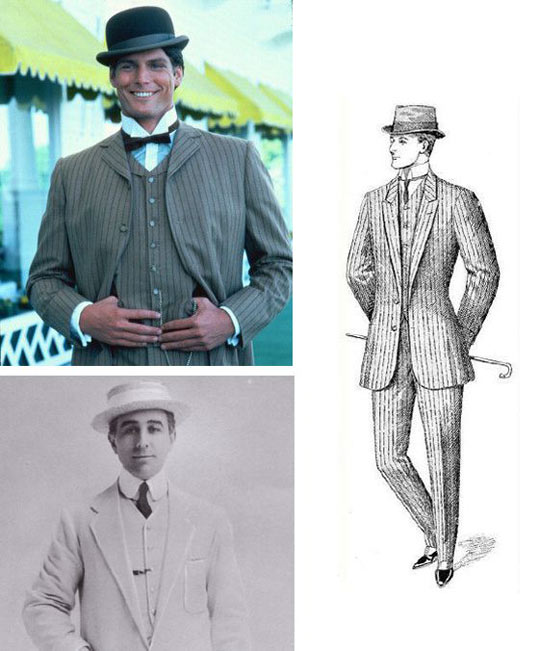 Whilst visiting the tailor recently, I regarded with interest one of the younger artisans trying on a suit he had begun to make for himself as one of the senior tailors conducted an informal fitting for him, dispensing advice, pinning and pulling at his junior colleague’s suit shoulders. The scene illustrated perfectly the kind of apprenticed, on-the-job training that is at the heart of bespoke tailoring. Making mistakes is all part of it; the sooner advice can be passed on, the better the tailor you make.

However, it was not only the paternalistic scene that attracted curiosity for its singularity; the cut of the young tailor’s waistcoat was also rather distracting. It was cut in an Edwardian manner; very high, with peak lapels. This style of waistcoat is rarely seen in this day and age, despite the recent renaissance of a number of waistcoat styles. Unlike the lower cut waistcoat, this cut does not allow for much shirt and tie exposure; the most one can see of the shirt is the collar and only a small length of the tie is visible.

In an age where shirts and ties are more visible than they have been at any point in their history, the use of such a waistcoat does seem anachronistic. However, there is an appealing conservative elegance to this style. It’s the sort of thing I’d throw on if I was in a mood, less interested in my attire and, perhaps, less confident. It restricts flamboyance to a minimum, and calls for subtler ties and plainer shirts. It is the exemplar style of the quiet gentleman.

As such, it occurred to me that it would be spoiled by accessory counterbalancing; a puffy pocket square would ruin the aesthetic, so too would a bright buttonhole. One of the best ways to work with the small space that one is afforded with such a waistcoat, without being too boring or too gauche, is to wear a bow tie. Despite it’s dandyish image, the bow tie works well with this most reserved of waistcoats as it does not expose that large, somewhat awkward expanse of shirt. The example of Christopher Reeve in ‘Somewhere in Time’ illustrates this perfectly.

However, should you feel disinclined towards bows, a necktie will provide a more than adequate alternative. The key thing to remember is that big patterns will be largely hidden, therefore any patterning on the tie should be on the smaller side; the hint of a ‘pattern punchline’ that lurks beneath the waistcoat is remarkably frustrating. It is also sensible to avoid Windsor knots and stick to small four-in-hands; the former dominate the space to an unattractive degree.