Historical Prescriptivism: The Awkward Bedfellows of Tradition and Evolution in Menswear 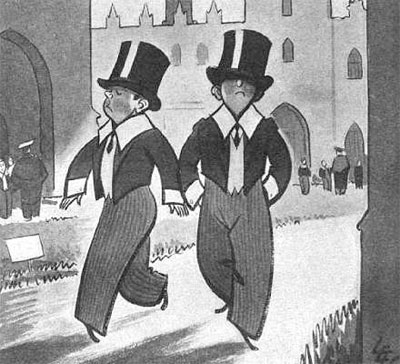 But, erm, what exactly is Historical Prescriptivism? The term relates to the linguistic notion that, whilst language is constantly evolving and changing form, certain styles (often those that were popular in the past) are considered ‘better’ language by a majority of speakers, at any given time. For example: the subjunctive in English often goes unmarked, these days, meaning that many people would say or write ‘If I was rich’ instead of ‘If I were rich’ – just the sort of thing your secondary school English teacher would have pulled you up on. Leaving aside the subjective argument as to which version is more pleasing to the eye or ear, it s not a wild suggestion to say that, in the future, the ‘If I were’ construction may be completely obsolete, having been superseded by ‘If I was’ which will then be considered standard, ‘correct’ English of the sort spoken by BBC presenters.

The point is this: change is natural and unstoppable but the majority will always resist change and look longingly to the way things were in the past as a sort of golden ideal. This linguistic example is allegorical for menswear, too, where innovation and evolution are often criticized for departing too far from the map drawn up by their historical forebears.

This issue came to a head for me, recently, because I was asked by a friend who has her own clothing line to design some menswear for a bridal line she is working on at the moment. In the process of collecting images for the moodboard, I did some research online, reading some of the men’s style blogs and fora in order to get a sense of the mood vis‐à‐vis morning dress and what

one ought to wear to a wedding. I was struck by how rigid and dogmatic the majority of posters were with respect to what precisely constituted acceptable wedding attire! When I came to sketching the pieces, I found myself wanting to make subtle changes to the clothes but feeling almost guilty for doing so.

Some degree of change is to be expected: as we live and work in centrally heated

or air‐conditioned houses and offices and are thus less exposed to the elements it is only natural that we should change our clothes. As body shapes change and new textiles are developed, we should expect this, too, to have an impact. The real difficulty for us lies in assessing how much modification of existing styles is possible without the clothes losing the essence of what they originally were or appearing ersatz. For what it’s worth, I believe that change for the sake of change is pointless; but I am all for tweaking, personalizing, and making more relevant the classic items and designs that have served us so well in the past.

I’m curious to hear your thoughts.