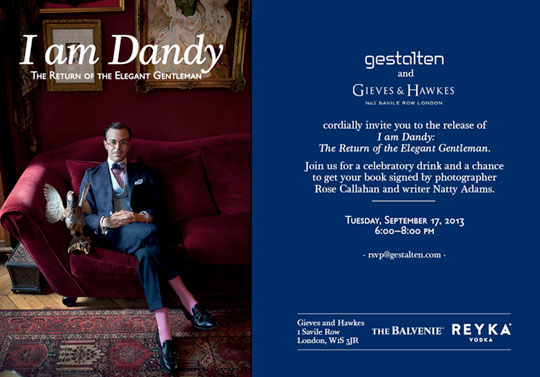 Book titles have never really meant that much to me. I generally couldn’t care less if a great book has the right name. It wouldn’t matter to me if Maugham’s ‘Of Human Bondage’ was actually called ‘Book 1’ or Fitzgerald’s masterpiece was titled something prosaic like ‘Poor Boy’s Rise and Fall.’

However, when I learned that writer Natty Adams and photographer Rose Callahan’s impressive compendium of international dandies, in which I was included, was due to be called ‘I Am Dandy’, I was somewhat dismayed. If there is one thing that I dislike about modern dandyism it’s the idea that one could, or should, label oneself as a dandy.

In my view, a dandy is a dandy by mistake, not by design. If you introduce yourself as a dandy, you define your approach to dandyism as deliberate. Not only that, but you attempt to set yourself advantageously against others. In other words, your self-awarded title seeks to set you apart as a prince among men; a dandy amongst non-dandies.

As amusing as the history of dandyism is – Brummell’s ‘dandiacal circle’, Wilde’s ‘green carnation’ gang – it’s actually not the most interesting thing about the movement. The heritage of belonging to a group and being able to identify with that group is not about self-proclamation but about the way in which we choose to be displayed to the world.

As a title, ‘I Am Dandy’ misrepresents most of the people in the book. Their medium of self-expression is artistic representation, not handing out business cards with the word ‘Dandy’ written in an opulent font. However, despite the provocative title, the book is a triumph. Natty’s witty stories neatly and succinctly encapsulate the personalities of some of the most unique dressers on the planet (I exclude myself from such vaunted company as my own style is comparatively plain) and Rose’s gorgeous pictures display the ‘dandies’ in their full finery, showcasing not only their replete wardrobes but also their fascinating characters.

On 17th September 2013, at Gieves & Hawkes on Savile Row, the launch of ‘I Am Dandy’ will be celebrated, with Rose and Natty present to sign copies. Also there will be many of the book’s colourful subjects. The best news of all is that readers of Mensflair will be welcome at the event, which takes place between 6.00pm and 8.00pm. It is sure to be a fascinating and entertaining evening in the environs of one of the grandest and most famous tailors on the Row. I hope to see you there.