If – The Straw Boater

I vaguely remember reading a copy of The Chap magazine once which proclaimed that the straw boater was the hat of the century. This distinction was achieved by virtue of the fact it could be worn by both the gentleman and butcher’s boy. 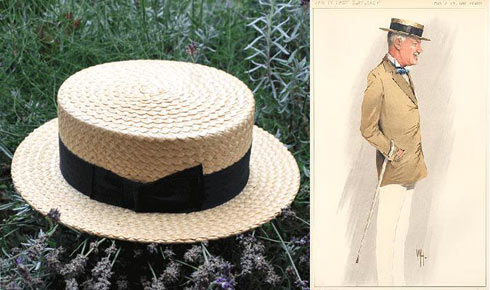 The straw boater is descended from the sailor’s hats issued to midshipmen in the Royal Navy near the end of the nineteenth century. The aim was a simple one, to provide protection to sailors from the sun in tropical climates.

Later, as a lighter and cooler alternative to the bowler, they became a popular form of summer headwear for gentlemen and costermongers in the East End of London – hence the butcher’s boy reference. Thanks to Lock and Co Hatters for that potted history.

Of course these days the Panama is the hat of choice for the summer, with the boater relegated to an eccentricity only seen at the Henley Royal Regatta. And there it seems to have languished for the most part. So, an odd form of head gear to discuss on these pages you might think.

But I’ve always had a bit of trouble when it comes to hats. I’ve tried many and purchased a few, but I’m never quite sure if they truly suit the shape of my face and head. In this I am not alone. Cary Grant gave up hats for similar reasons, and in so doing helped hasten its decline in popularity.

However, unlike Mr Grant, I’ve become folliclly challenged and the passage of time increasingly makes finding a hat a matter of necessity rather than luxury. This is particularly true of the summer when unguarded the top of my head is lightly grilled. Of course the classic summer hat would be the panama, but again I’m yet to find a shape that suits me.

And this brings me to our unusual and eccentric friend the boater. Recently I’ve seen it worn to great effect, in some rather unusual ways, which has prompted me to give it a second look. The first time was at a street party earlier in the year. One of the fellow organisers had one, which paired with a Hawaiian shirt, cargo shorts, desert boots and sunglasses looked far cooler in the flesh than it sounds in the re-telling. I’ve also seen it used with great subtly and charm with jacket and jeans. In some ways I justify my interest in this hat based on my theory of contrast, as outlined in a previous posting.

But despite all this, I fear this wonderful bit of now ignored headgear will forever remain on my ‘if’ list – short for, if only I had the courage.