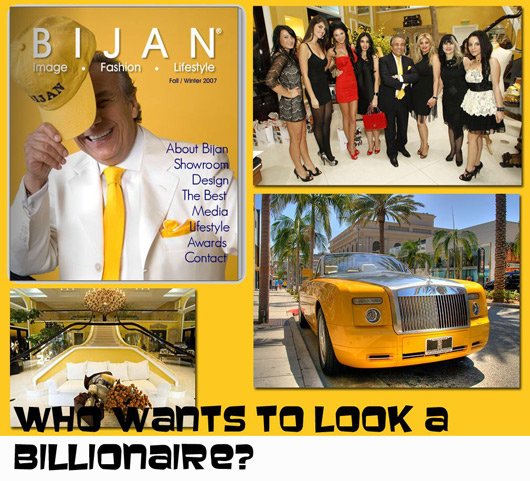 A friend of mine attempted poignancy recently when we were discussing the passing of Bijan Pakzad. “Who?” he said, initially. After my brief explanation of the Iranian designer’s illustrious past, he scoffed in an amused fashion and declared with remarkable confidence; “With his passing, you will see the passing of his entire approach to selling fashion.”

It is true that Bijan’s approach to style was nakedly materialistic and as “the costliest menswear in the world”, it certainly had no objective other than to portray it’s wearer as a very wealthy person. My friend’s perspective was that the nouveau riche are beginning to acquire a sense of restraint and that buying expensive clothes for the sake of it was no longer the zeitgeist.

However, though conspicuous dress is no longer the most popular symbol of wealth – certainly in comparison with the frilled and baubled centuries of the past – a great many wealthy people need, and will always need, the assurance of expense, particularly in a fashion world which is now more accessible to the masses.

Bijan was just one in a long line of exclusive clothiers, stretching back through the ages, who cleverly preyed upon the insecurities of the obscenely rich; for whom ‘being rich’ was never a problem, but for whom ‘looking rich’ never came naturally. In an age where the average office worker can easily be mistaken for a millionaire, looking as rich as you are is increasingly challenging; Bijan was able to cosset his customers in ‘the most expensive store in the world’, purr through the ludicrously high-priced inventory, flatter them, ply them with white-gloved attendants and vintage champagne and vigorously wave a personal goodbye as he counted the several hundred thousand dollars of revenue achieved from a single visit. When it came to Bijan, those who had it weren’t afraid to spend it.

Far from signalling the end of such extraordinary extravagance in menswear, Bijan’s passing has opened a world of potential custom to the next enterprising designer with half a dozen Hollywood names up their sleeve. For all the famous names he dressed, there were hundreds more who had only wealth to their name; word of mouth draws people in but it is the patronage of the likes of Frank Sinatra, Ronald Reagan and particularly designers like Giorgio Armani and Oscar de la Renta which comfort the high-spending, arriviste, anonymous billionaires when they drop several million dollars in an afternoon in Beverly Hills.

Most of the clothing is unremarkable and, though brightly coloured, is a hackneyed mix of Billionaire and Brioni, which is why I haven’t mentioned it until now – it simply isn’t the story. While my friend was right to point out the comical naivety of being attracted to a store that promises expense above all things, he misread the issue as a one-time-hoodwink; casting Bijan as a chancer who knew his market and exploited their extraordinary wealth and now that he is gone, the billionaires’ mist will clear. The idea that everyone who attains great wealth knows exactly what to do with their money is laughable; great wealth is a puzzle and the most intelligent of minds has little idea what to do with all of it, though charity is often bayed by the masses.

The lesson of Bijan’s success is clear; money may not buy style but it can certainly buy money – at least the appearance of having it.