In Praise of Sartorial Individuality 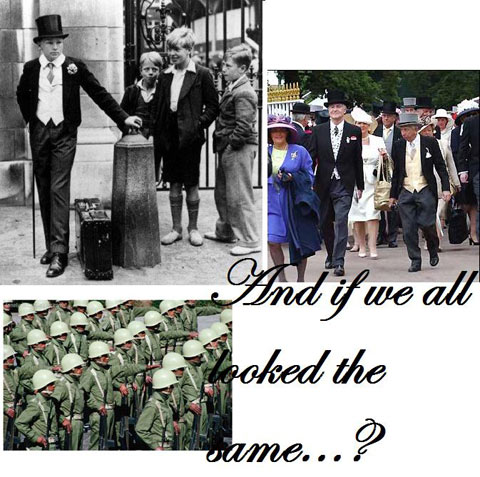 In a particular movie scene, a Victorian gentleman makes his way into a particularly dubious establishment, something in the manner of an old coaching inn; full of rose cheeked, merry groups of drinkers, smiling and scowling in equal number. His magnificent formal evening dress, white tie, top hat and tails, shines in the dim light with a near celestial luminescence. The owner of the establishment, a portly man with a pompous ensemble of his own, stands in salute, instructs the entertainments to cease and announces with pride; “The Two Turtles is honoured by the visit of a gentleman.”

Such deference, though artificially portrayed, was not uncommon. Smartly dressed gentlemen were clearly identifiable among the rank masses, particularly in areas of town unfamiliar to the silk top hat and patent shoe. They were fawned over and bothered for their charity but generally, they were left rather well alone. Certainly they might have been the object of an optimistic theft in a dark alley on a gloomy evening, or the reason for a knowing nod, nervous glance or a hushed word, but generally whatever animosity there might have been to the educated and well-dressed, it was apparently well disguised.

These days, chastisement of chaps for the way they dress is, in my experience, commonplace. If you happen to be among certain groups of people in certain areas of cities, you come across certain persons I refer to as ‘spoilers’; spoilers, not because of the picnic-table fibreglass they attach to the back of their vehicles but because they often try and spoil the fun of dressing well. I remember walking past a growling trio who, rather startled by my advancing form, gave me the ‘once over’ and muttered ‘Poof!’ as I passed. I am little concerned by such antics. I don’t dress to attract attention or seek approval. Therefore, such appraisal is easily forgotten. But such events do cause ripples of thought; what would the world be like if everyone dressed the same?

If everyone dressed in a way one particular person, or one group of people, approved of the events of fashion conflict would surely never arise. Everyone would approve of one another, differences in such matters would be minute and inconsequential and you would have a uniformity of attire, similar to a day at Ascot or an ambassadorial dinner. However, if everyone dressed in glorious morning dress it would cease to be special and ceremonial; no one would be admired for their particular fashion or style. Clothing itself would cease to be important as, the natural progress of conflict is to cause discussion; and discussion which can divide as well as unite.

Looking at the glowing pictures of catalogue models, all perfectly groomed and attired, enjoying impossibly beautiful afternoons on Cambridge punts, elegant dinners on Tuscan terrazzas and glorious sunsets in Maine, it is difficult not to conclude that fashion’s message is clearly: ‘Dress like this… and the world will be beautiful.’ Of course, if more people took more interest in clothing and cultivated attractive personal styles, it would be an exotic occasion indeed, to walk down the street, oohing and ahhing at the cornucopia of elegance on show. I have been to several locations where I have relished and celebrated the sartorial artistry of those that surrounded me and the knee jerk reaction is quite naturally; ‘If only more people dressed like that!’ A famous writer I had the pleasure to meet and ask for an autograph remarked upon hearing my first name; ‘Ahh, Winston. More people should be called Winston…although if there were too many, it’d be rather terrible.’

There is nothing that cheapens quite like popularity, or I should say, over popularity. The fashionistas of my acquaintance, as fickle as they are, are loyal to one ideal; as soon as a garment appears in Primark, in the eyes of fashion, it is dead. Although such slavish devotion makes me chuckle heartedly, I empathise with such thinking. Men of style and flair who visit these pages, looking for advice or seeking to provide their own valued input, are in a minority. I for one am happy that, as a minority, it remains; stylish gentlemen are jewels to be enjoyed on occasion and for their charming individuality and expression of sartorial understanding. As they are, they shine as precious stones; treasured or ridiculed, berated or applauded, either is preferable to the idea of an oppressively numb uniform world.