In Search Of Good Tailoring 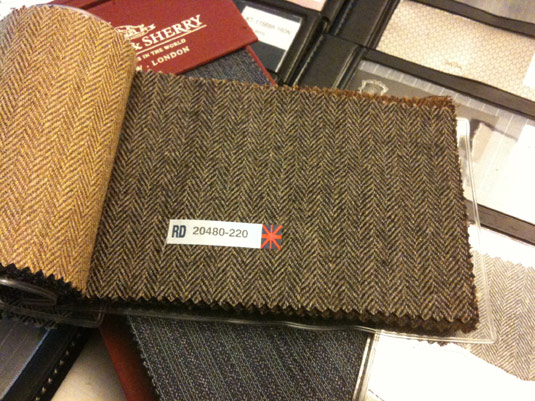 Michael Anton (writing under the pseudonym Nicholas Antongiavanni) wrote in The Suit: A Machiavellian Approach to Men’s Style

that “since tailored clothing can make a man look either rakish or ridiculous, as well as shorter or taller or fatter or thinner, it is necessary for him to choose models, fabrics, and patterns that flatter his shape while minimizing its defects.” While the man of average height and weight can wear most anything off-the-rack and achieve a flattering result, I find that most ready-to-wear clothing is unflattering on me. I have short legs that are out of proportion to my long torso, some slight middle-age spread and a protruding posterior. Most of the ready-to-wear suits on the market in the United States combine a single-breasted, center-vented jacket with pleated, low waisted trousers. Low-waisted trousers sit under my belly and visually chop me off at the waist, accentuating both my short legs and extra weight. My protruding rear wreaks havoc with center vents. I have come to the inescapable conclusion that to achieve the look I desire will require bespoke clothing.

I made my first foray into custom-made clothing earlier this summer when I ordered a made-to-measure navy double-breasted hopsack blazer from Tom James. That jacket arrived with some serious fit issues that were (after cutting two new sleeves) eventually mostly sorted out. One sleeve is still a little longer than the other and the button placement is a little off, but both of those issues can probably be fixed before I put it back into the rotation next spring. Nevertheless, I have received numerous compliments on the blazer and think that it turned out reasonably well.

From my experience with the Tom James blazer, I came to understand the value of fittings during the  construction of tailored clothing, and the problems that can arise without such fittings. At a basted fitting a tailor will have sewn the basic parts of the suit together with white cotton basting thread. This fitting gives the tailor the chance to correct any major errors in your pattern. At the forward fitting the suit will be nearly complete. This fitting gives the tailor a final chance to correct any minor details before the suit is completed. Even after the suit is complete, minor tweaks may be necessary.

Armed with a desire for a custom suit and my previous dubious experience with MTM clothing, I made a road trip to Atlanta, GA, this past weekend to meet with a traveling tailor from Hemrajani Tailors. When I arrived in his hotel suite I saw an array of fabric books laid out on a large table.  We discussed the type of suit I was interested in having made and began to look at some fabric swatches. While we looked at the fabrics I inquired about the basted fitting. My assumption was that I would have to make another trip in several months to catch up with him on his travel route for the basted fitting. I was then informed that there would be no fittings; a completed suit based on measurements taken that day would be shipped to my door in six to eight weeks. I dropped back to punt.

The trip was not a complete waste.  I have for some time wanted to order an unlined shirt jacket like the ones often worn by the late French actor Philippe Noiret.  Those of you that read Will Boehlke’s blog A Suitable Wardrobe may have seen the linen and wool versions that he has written about in the past. I placed an order for a shirt jacket in the pictured brown tweed. It will have four bellows pockets, coordinating bone buttons, and a small slit at the bottom  of each side for easy access to trouser pockets. Mr. Boehlke’s shirt jackets are made by Hemrajani Tailors so I was comfortable placing a MTM order for that item. I will write a follow-up about the shirt jacket when it arrives in the next couple of months.

In the meantime, I am still in search of a tailor. Access to quality tailoring is a real challenge while living in a small town in the American South. Sometimes I envy those of you living in New York or London. Oh well, we have better BBQ.  On a serious note, if anyone has a recommendation for a good tailor in cities like Charleston or Atlanta, or knows of one that travels through the American South, please post a comment. I’d like to check them out.