In The Fishbowl With Carreducker

Oh does it feel good to be back in London. It’s been quite a few months, but last time I was here I profiled James Ducker of Carréducker shoes. This time I thought I would drop in on him at their new digs at No.1 Savile Row, inside Gieves & Hawkes.

Because of construction, I turned the corner from Savile Row to use the Vigo street entrance, and was immediately surprised to see they’ve smacked James’ face right on the door. This partnership was just getting off the ground in November, so I’m glad to see things have blossomed so well. Entering the building, I could see at the very back of the main room the glass “goldfish bowl,” as James affectionately calls it. There he was, pounding away at some lasts, as I sauntered over to say hello. The couple-meter journey took longer than it might have, due largely to a fine selection of striped knit ties. But eventually I made it and was greeted most kindly.

James took me on short tour of the new facilities at Numbers 1 & 2, which include a blazer room, salon, antique shop, bespoke fitting room / luxe lounge, and workshops, before settling back at his bench to finish the lasts while we chatted.

Carréducker, in addition to the endless possibilities of bespoke, have a few samples exclusive to their new home. My favorite was hands-down an electric-blue suede chelsea boot with a military ribbon pull at the back. And the best part is, because everything is still bespoke, altering existing designs to suit yourself in not only allowed but encouraged. If you want the toe shortened or elongated, great. If you’d rather the gussets be navy than black, fantastic. The best of both worlds, you get an aesthetic from which to draw, but ultimately the choices are yours.

The biggest advantage to trading out of the goldfish bowl though is the intimate relationship the customer gets to develop not just with the finished product, but with the art and artisan as well. You can drop by any day, whether you’re buying or not, and watch James and Deborah at the bench. Lasting, making, polishing, it all gets done right here. When speaking with me, this was the aspect James got most excited about. “Customers,” he said, “are more interested in where their food and things are coming from. And now they can know with their shoes too. You get come in and have a look, and you know we’re the one’s making.” 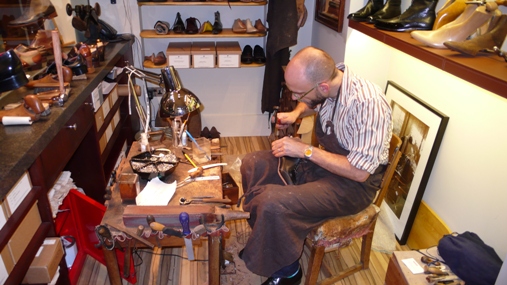 There is also, just outside the fishbowl, a gent by the name of Justin Fitzpatrick offering shines. Some of you might already know him from his blog, The Shoe Snob. When I was in he had just finished a gorgeous pair of black laceups in whose toes I could see every pore on my face. So if you need a shine and would rather drop your shoes off than take a seat in the Burlington Arcade, get thee to No.1.