In Tune With Nature 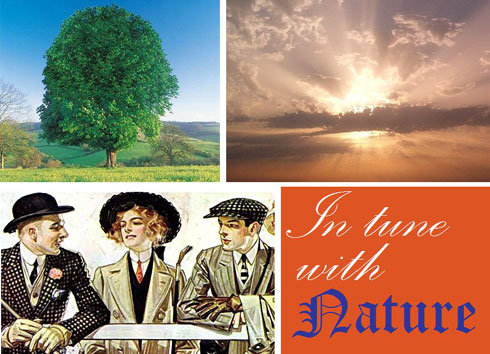 I once had the fortune of passing through a filming location, near Carlton House Terrace. The catering vans were lined up, the cameras and gigantic lights poised, and soil, representing a pre-tarmac era, covered the streets.

Props of an antiquated style were lying around, a few horses were standing near to an equestrian vehicle and dotted around the scene was a very decorative collection of actors and extras; they were standing or sitting, chatting with that particular anxiety of believing the conversation to be soon interrupted, smoking and dressed in splendour.

The women wore long, decorative Edwardian coats and enormous hats. At their sides, the men supported their arms with buckskin gloves and leaned on ebony canes; they wore a variety of top, bowler and Homburg hats, short and tailed coats, neckties cravats and bows.

The sheer variety of styles, contrasting to the women’s general uniformity, was a slight exaggeration of the period but nevertheless a good example of the revolution of Edwardian menswear that signalled the end of the gloomy frock-coated uniformity of the Victorian period and the adoption of a youthful, more stylised approach to fashion.

Aside from the variety, the other thing I noticed about the clothing – despite the fact that it was pure costume – was that the coats, trousers, hats and canes were perfectly in tune with the surroundings. Members of the crew, attired in twenty-first century gear – puffa jackets, jeans, trainers and baseball caps – looked inordinately scruffy next to the slim, tailored lines and subtle colours of the characters.

It was also remarkable that when some of them strolled under a tree, near a chestnut mare or past a carriage, how in tune with Nature itself the clothing was; I looked into the sweet, pink afternoon sky and imagined a colossal smile forming in the clouds.

The issue of the purpose and art of clothing struck me there and then. I had always believed in the harmonious approach; the reflection of Nature, the vanity of attempting to recreate its beauty, is nevertheless noble. I have always believed this to be true of architecture but now I began to notice that the responsibility of harmony, of bowing to Nature – with her colours, frills and curlicues – extended to other forms of art. There is little in life that makes us happier than Nature itself and man has sought to faithfully glorify nature, to pay tribute to the magnificent inspiration it conjures in humankind.

The unifying quality of that variety of clothing was that it all fit perfectly with the columns, windows, trees, gates and carriages that surrounded it. It is a quality that also unifies clothing from previous decades and even centuries: I could not imagine a Tudor, Stuart or Hanoverian subject looking as incongruous as the twenty-first century runners, skipping around the set in clothing without line, form or beauty.

This division emphasised to me not that clothing had ceased to be an important point of the faithful artistic representation of Nature, but that this representation was more important than ever before. The voice of the quiet appreciator of an endangered oak, a glorious terrace of buildings soon to be demolished or a silk topper discarded by its owner, is growing ever quieter in the din of ‘progress.’