Practical Items for a Summer Holiday

The summer in London has been, until very recently, absolutely diabolical. So terrible that even the most patient of Londoners have been seen scowling at the skies, asking the question that rouses the happiest of us from a state of passive satisfaction to one of insistent curiosity; why? For it has been, in the words of Edmund Blackadder, “wetter than a haddock’s bathing costume.”

The gulfstream, apparently, is to blame; sitting too far south for the time of year, making April to June one of the coldest, wettest and most miserable summer periods anyone can remember. It all seemed like some kind of biblical punishment, concocted by Mother Nature. When would we see the sun? Or even the sky? “Not until you’ve learned your lesson” the heavy grey clouds groaned.

This Sunday was a glorious day. Sunshine, blue skies, smiling faces. It was like one of those moments in fairytales, when the powers of evil that cursed the land have been banished and the once-maudlin citizens unite in celebration. Excitement and music abound. I fancied myself on holiday, almost. Until I remembered what holidays really feel like, and then I, in my insufferable ingratitude, fancied myself abroad. In the sun. On the sand.

I had been discussing holidays with a pal of mine who wondered what I actually wore en vacances, considering that my metropolitan attire was, as he put it, “pretty full-on.” “I have some things” I said “that I will always take on holiday.” 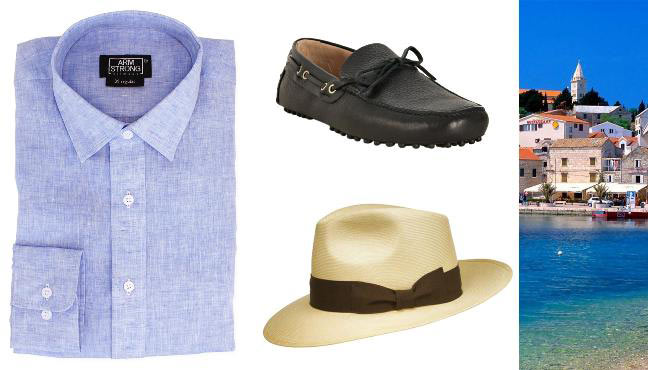 In the dictionary of summer holidays, next to the word ‘indispensible’ you will see a picture of a light blue linen shirt. Although many prefer the white linen shirt, the light blue will see out a week far better; white is far more precious and prone to exposing unattractive stains. Not only that, but the beautiful aesthetic of linen is far more appealing in colours a number of shades darker than white. Light blue is not only flattering but also practical; it can be worn with swimshorts on the beach or to a restaurant for dinner, although preferably not on the same day.

Headgear is essential on holiday. Being one who is partial to lunchtime and afternoon booze, and also one who is not the most compliant subject of sun-lotion, covering the head from the sun is essential. The only option is to purchase a panama hat. Baseball caps are a no-no (just ask your poor red-raw neck) and those small-brim trilbies from TopMan won’t protect you from the sun. You need decent width to ensure sufficient shade, and besides, there is no better excuse to wear one of the finest designs in the history of millinery. It also goes with everything.

Though espadrilles always accompany me on holiday, it is still a pair of driving shoes that are first into the suitcase. I am not particularly precious about my espadrilles but there is something reassuring about a pair of leather driving shoes; ideal for splashy dinners by the harbour, or for aquatic jaunts, they are exceedingly practical, belying the singular purpose suggested by their name. Not as awkward as deck shoes and more comfortable than wearing penny loafers sockless, they are the go-to shoe for summer holidays; just don’t wear them with baggy trousers.