Every man admires James Bond’s clothing, but have you wondered what makes the secret agent’s clothes so special? It’s mostly about the suits, and a well-fitted suit makes all the difference. But what about the style? Bond’s suits have always been on the more traditional side, often with 3-piece suits for the office, though Bond always found some way to bring elements of current fashion into his clothes. This article will step through the past five decades of James Bond’s style, showing how you too can dress like Bond.

Sean Connery’s suits in the 1960s were classic English Savile Row style. The first thing that comes to mind when we think about 1960s suits are the narrow lapels, but Connery’s were far from the extreme. His suits had softly padded shoulders, a full chest but suppressed waist, and trousers with English double forward pleats and tabs to cinch the waist. Whilst the pocket style and rear vents differed from suit to suit, this cut was always the same. Connery wore mostly suits in shades of blue and grey, with a few dark brown, in solids, herringbones, simple pinstripes and glen plaids. Fabrics ranged from lightweight tropical worsteds to heavy winter flannels, with the occasional dupioni silk and mohair. It all sounds very traditional, but the modern touch to Connery’s suits came with the two-button front. By the 1960s in the United States, two button suits had become the norm, but to the English anything other than a 3-button suit was fashion forward. 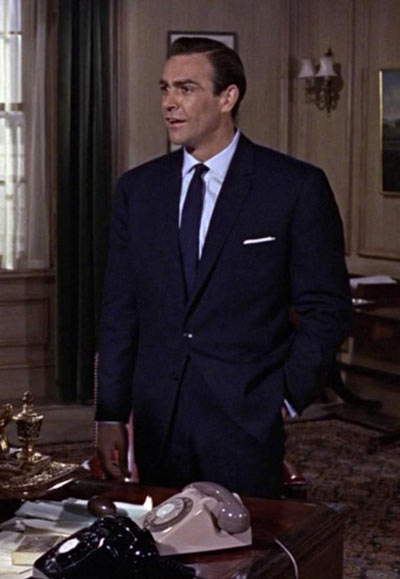 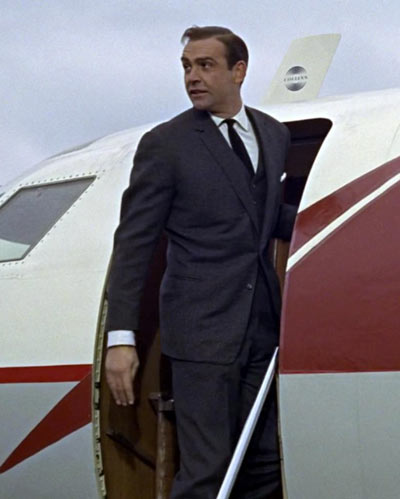 When former model George Lazenby took over the roll of James Bond in 1969, he brought more fashionable tailoring to Bond. His rakish suit jackets were more fitted with a cleaner chest and shorter in length than Connery’s, and he wore flat front trousers instead of pleated. Lazenby wore both 2-button and 3-button suits, with double vents and some with hacking pockets, two now quintessentially English elements. This overall style has seen a resurgence in popularity over the last few years, though today’s style is missing the strong English flair present in George Lazenby’s suits. 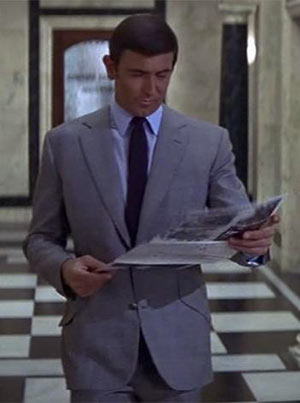 Sean Connery returned to Bond and brought the character into the 1970s with Diamonds Are Forever, updating his old style with wider lapels and flat front, wide leg trousers. His new suits were double-vented and many had hacking pockets. When Roger Moore took over Bond his suits were the same in overall style, and as the 70s progressed, his lapels, pocket flaps and trousers widened. These are what the average person notices about 1970s suits, but if you look past that you will find that Roger Moore always wears perfectly tailored suit. No matter how you style a suit, a proper fit is always most important. Whilst some of Moore’s suits incorporated the traditional colour palate found in Connery’s suits, he also wore many more suits in earth tones, plus a large number of silk suits as well. In addition to his 2-button suits, Roger Moore occasionally wore double-breasted suits, mostly in the classic 6-button style with 2 rows to button. 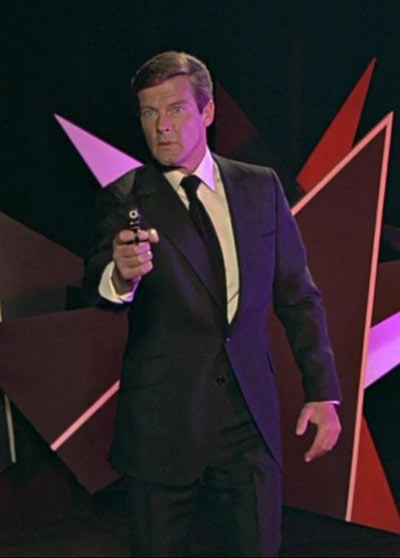 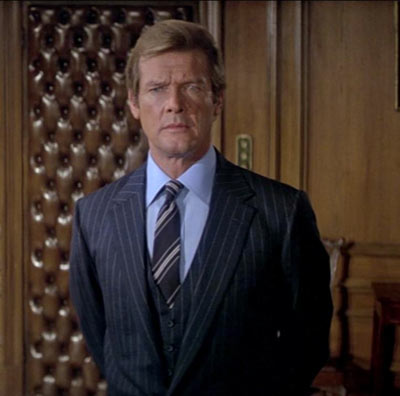 Roger Moore entered the 1980s with a new tailor and more conservative style. The lapels and trousers narrowed and the hacking pockets were gone. His suits were now in more traditional English fabrics with blue and grey chalkstripes for London and tan and brown gabardine for warmer climates. His one consolation to the 1980s was a lower button stance, which happens to suit his figure very well. Timothy Dalton’s clothing is hardly worth mentioning. His suits in The Living Daylights hark back to Connery’s, but have a more relaxed fit. Dalton’s suits in Licence to Kill introduced Italian style to the Bond series, something Pierce Brosnan would continue with in the 1990s. 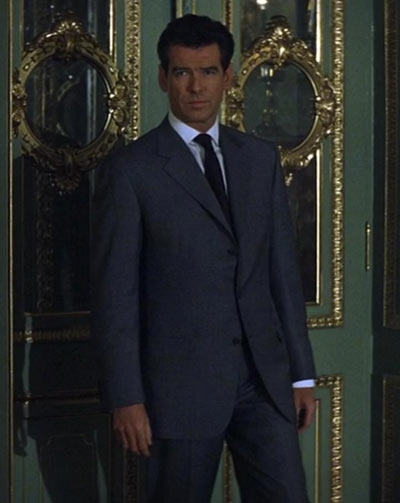 Pierce Brosnan was known for his Brioni suits, updated for the 1990s with 3-button fronts and reverse-pleat trousers. Whilst many of his suits were Anglicised with hacking pockets and double vents, they did not escape Brioni’s strong Italian silhouette. The Brioni silhouette is defined by its square shoulders and clean chest, the ultimate power suit. Even though Brosnan’s suits weren’t made in England, they were made from in classic blue and grey solid, pinstripe, windowpane and birdseye English fabrics. 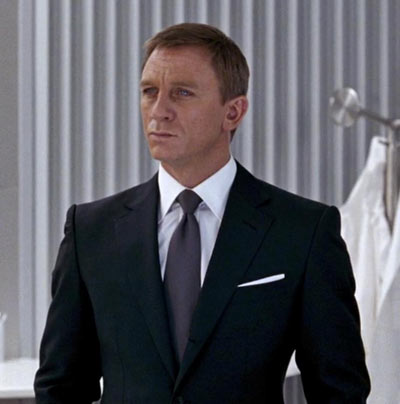 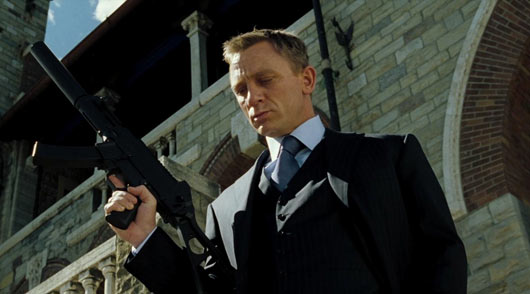 Daniel Craig started off in Casino Royale with 2-button and 3-button Brioni suits, but switched to more fashionable Tom Ford suits in Quantum of Solace. Tom Ford is the most fashionable suit brand Bond has ever worn, but its English-influenced style is rather appropriate for Bond. The Tom Ford suits are cut with strong shoulders, a clean chest and a 3-button front that rolls to the middle button, essentially giving the jackets a 2-button silhouette. The jackets all have double vents and ticket pockets. Though Tom Ford suits have a striking silhouette, they are firmly rooted in classic style. The trousers have a flat front with a lower rise, Daniel Craig’s only concession to current fashions as far as his suits are concerned.

Equally important to the suit are the shirt, tie and shoes.

Most of Bond’s shirts throughout the series are cotton poplin in solid white, light blue or cream. These three shirts go with everything and are all the well-dressed man needs. Connery and Moore were known for their fancy 2-button turnback cuffs (also known as cocktail cuffs, a popular 60s style that rose to prominence from Dr. No), but Bond has worn barrel cuffs and french cuffs throughout the series as well. The key element to the English shirts that Bond always wears is a large spread collar, and English shirts never have a breast pocket. Shirts should be somewhat fitted but never tight.

Connery started the series with only one tie, a navy blue grenadine. Grenadine ties look similar to knit ties (the ones that have square bottoms)  but are not related in the least. Grenadine silk is woven, not knit, and the ties are constructed likes any other normal tie. Later, Connery expanded to wearing black, navy and brown knit ties and black and brown grenadine ties. Connery’s Bond showed how it’s possible to dress with with such a limited tie collection, which is often the case for travelling businessmen. George Lazenby introduced the red knit tie to Bond, and it wasn’t until Roger Moore became Bond that Bond wore non-solid ties. Roger Moore wore striped and patterned ties, but he still wore many solid ties like his predecessors. Dalton wore mostly solid ties as well. Perhaps the best argument for solid ties is that they never go out of style. Avoid loud, busy ties like many worn by Pierce Brosnan, as those all look dated now. Daniel Craig opts for simple woven macclesfield ties, understated and formal.

Aside from suits, Bond occasionally wears sports coats, though we haven’t seen those in a number of years. We have seen country tweed and cotton safari jackets, but Bond’s favourite is the navy blazer, coming from a naval background himself. Bond’s navy blazers are either single-breasted with two buttons or double-breasted with six buttons. And of course the buttons are metal, often in silver instead of brass. Navy blazers always have double vents. Bond wears his blazers with or without a tie, and with grey, beige or white trousers.

Bond’s footwear is always professional, just as everything else is. With a suit, the shoes are always black leather with a leather sole. Throughout the series Bond has worn all the classics, including cap-toe oxfords, 2-eyelet derbies, plain-toe monk shoes, elastic-sided ankle boots and horse-bit slip-ons. The last two are harder to pull off in a business setting. For more casual suits and sports coats, Bond also has worn essentials such as brown suede chukka boots and brown wing-tip full brogues.

Bond sticks to the classics. He ties four-in-hand knot, not a windsor. He doesn’t wear a solid black suit unless it’s to a funeral. And he doesn’t wear rubber-soled shoes with a suit. He sets an excellent example for how to look professional and command respect, in or out of the office.