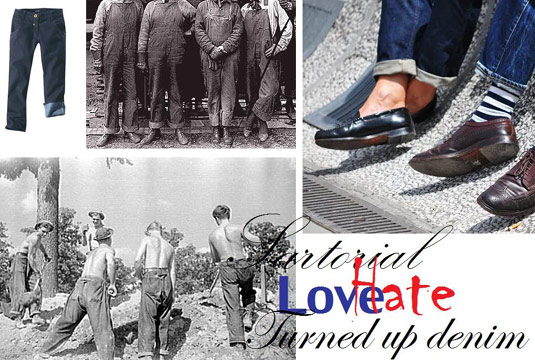 Jeans are not trousers. No oxymoron this; jeans are jeans and need to be treated as such. Though a little tailoring wouldn’t go amiss, treating jeans like a pair of wool flannels is an aesthetic mistake. Equally, jeans that are treated like an antique polishing rag are also an error. Cutting holes in a ragged pair is as weird and unwelcome as ironing or pleating, but one of the more common foibles of denim wearers, a practice with strong historic precedence, can also attract the ire of onlookers; turn-ups.

Turn-ups are historically associated with the early decades of the twentieth century when the practice was widely adopted into fashion and became the norm, for a number of decades, in suits and trousers. The original purpose of turning up trousers was to avoid damage; sailors, for example, would turn them up on a wet deck. Clippings of Edward VII wearing turn-ups on his country jaunts gave the style, considered until then an inclination of the working masses, the royal seal of approval: society, and fashion, followed suit.

It wasn’t until the 1950s that denim was accepted as appropriate attire. Until then, the fabric had been worn in the workplace by blue collar employees and had been devoid of any detail of design or shape – most of the original workers jeans were loosely fitting and lacking in any appealing shape. However, many of them were also turned-up; to avoid dragging the hems in the dirt and grime of the working environment and precious little to do with a desire to cut a fashionable figure as most workers were required to pay for their own overalls.

The practice therefore has some stylistic precedent, despite the fact that it is accidental. Strangely, turned-up denim can often look smarter than plain hemmed denim though, for some, that contrast between the outer side and inner side of indigo denim is too distracting and looks affected. The quantity of turn-up seems to be a matter of personal taste although the bigger the turn-up, the more noticeable it is. Personally, anything much above 2 inches and the jeans begin to look comical.

Perhaps due to its working-class origins there is very little dogma on the practice of wearing denim. It was a trend begun by the young for the young; the word ‘proper’ was distasteful to their rebellious vocabulary. As a result, no one seems able to successfully dictate exactly what a pair of jeans should be.

Personally, I think the turn up looks best on slim, straight legs and when it finishes well above the shoe; long, baggy jeans do not suit the style as well.