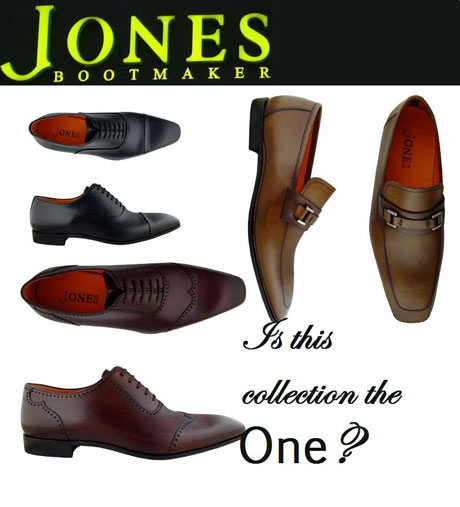 Where would we be without our material dreams? I have often wondered what sort of person I could be without my never ending desire, nay craving, for perfection. When I wrote of my desire for a pair of Berluti’s I concluded that such a desire should never be satiated should I ever wish to enjoy any pair of shoes ever again. Achieving Everest in the first leap could prove to be disastrous to my sense of fulfilment. I recently ventured into Jones the Bootmaker in the spirit of attempting more lowly summits. Jones is a respected but rather commercial English shoe manufacturer. It is certainly an established name and one of the most respected high-street shoe shops but despite the Victorian trading date and the historical boasts, Jones has had little to recommend it. The shoe designs have been bulky and undistinguished. A year or two ago when I ventured into a branch to inspect their stock I was determined never to return due to the poor quality of design and manufacture; for shoes made of an exceedingly average leather, clumpy and unrefined, they were expecting gentlemen to part with at least £100. For a shoe aimed at the ‘young professional’ market – i.e. chaps who manage electronics stores – this was rather a lot of money.

I happened to walk past a branch on my way to lunch recently and despite echoes of my vocalised determination never to cross the threshold of Jones the Bootmaker so long as I shall live, I decided to have a quick browse; ‘To satisfy myself’ I mused ‘that there really is nothing I want in there.’ Indeed for several minutes there was nothing at all I happened to be interested in; square toes, exposed stitching, dull leather. I was thirsting for the pornography of an Edward Green or a Crockett & Jones when my eye glanced at an object that seemed curiously out of place; could it be? Yes. It was. It was a ‘proper’ shoe. I picked it up in disbelief, expecting it to vaporise in my grasp; the wishful mirage of a disappointed daydreaming shopper. Immediately, a Jones employee asked me if I needed any assistance. I confessed that I was in need of such assistance; some plausible explanation as to why there was such an excellently shaped shoe in the design desert of a Jones store. The assistant informed me briefly that it was part of the new ‘One’ Collection. Sadly, as with most high street shoe stores, her knowledge of shoes and shoe making ended there although her knowledge of sizes, European and English, in relation to stock levels was formidable.

The One Collection is specifically aimed gentlemen who are willing to spend money on good design and good quality, but who cannot afford the Jermyn Street whole-cuts or ‘superbrands’ such as Gucci and Prada. The fact that a manufacturer such as Jones has taken notice of the need to fill the huge gap in pricing, in the purchase of men’s footwear, is a pleasing one. However, there is the probability, in the UK at least, that chaps interested in spending £195 on a pair of shoes would rather not spend that sort of money in an establishment like Jones the Bootmaker; ‘Why bother’ they might suggest ‘when you can get a pair of Crockett & Jones for another hundred?’ Jones might experience better success overseas where the distinctly English name, the archaic reference to ‘bootmaking’ and the reassuring Victorian trading date carry greater currency.