It must be difficult being the wild, party loving younger son of a family very much in the public eye. The elder, the heir, courts responsibility from an earlier age; the family guides them, history sets fine examples and though a great weight is set upon their shoulders, their path is clear and pre-defined. Younger sons, though they may be part heirs, are not given this sort of mollycoddling. Second sons like Prince Harry are privileged, yes; the third in line to the throne never wants for a thing, but just what is expected of him?

The Agnelli family are the Italians royals’. They are photographed, interviewed, fawned over and worshipped as surrogates for the vacant throne. Though the Prince of Naples and the Duke of Aosta may fight out their pretensions to the kingdom of Italy, Hello!, OK! and the “stalkarazzi” only seem interested in what the people want, and an insight, whether welcome or unwelcome, into one of the most glamorous and privileged Italian dynasties is, ironically, what the people want the most.

One member of the family, a younger son as it happens, is currently the media’s target of choice. Agnelli by blood, but not by name, Lapo Elkann is becoming an increasingly recognisable chap on the transatlantic chichi charity circuit. Ciao-ing everyone in Cipriani from Mary-Kate Olsen to Donald Trump, the enigmatic New York born Italian has also made a name for himself as a man of style. Though he is criticised by some for mocking his grandfather Gianni’s true style in an over-affected way, Elkann’s approach is actually rather more sophisticated than an alleged raid of old Agnelli’s wardrobe.

His elder brother, John Elkann, who is tipped to become head of the Fiat group, is certainly well-dressed but not in a noticeable way. His clothing, like his so-far-so-good life, is sober. Lapo is wilder; his risky choices in clothing mirror his high-octane reputation for drugs (he survived an overdose of cocaine in 2005 that put him into a coma), dating numerous MAWs (model/actress/whatever) and pursuing a vigorous enjoyment of life that is standard form for third generation scions.

His interesting blend of hand-me-down suits, tailored jackets, retro sports clothing and natty accessories is actually quite original. I can fully understand why Vogue saw fit to drape the prestigious accolade of Most Stylish Man over this stallion’s shoulders; combining double-breasted suits with Bikkembergs and using a piece of tying rope as a belt is somewhat revolutionary and though his experimentation produces mixed results, I applaud his efforts. 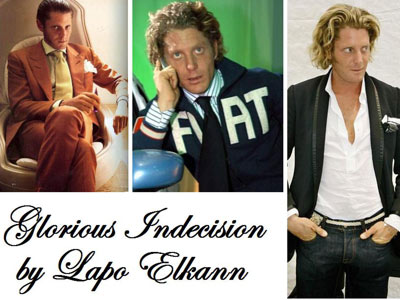 One thing affirming his innovative approach is the inability to pin-down or label one designer or one icon of his influence. Some men dress like window displays from Bond Street; borrowing everything from one designer and reproducing a look. What I like about Elkann is that he IS his look. He is impossible to pigeon-hole and that makes him all the more appealing.

I also like the curious duplicity of his wardrobe. Sometimes, he masquerades as the obedient offspring; stiff collars, styled hair and pinstripes, then suddenly he is the billionaire-to-be hellraiser; insolent tennis shoes, plush pashminas, stubbing out cigars in his grandfathers suits. ‘Tut-tut’ indeed.

Apart from his little foray into design with überfashion designers DSquared, or his updating of the Fiat brand (his suggestions to return to retro, including the reinstatement of the 1930s badge, were fantastically successful), Elkann has been quiet in his artistic pushes. However, something tells me that a man with so many ideas for his own form must have more creativity up his sleeve.