Let’s Hear It For Baron Of Piccadilly 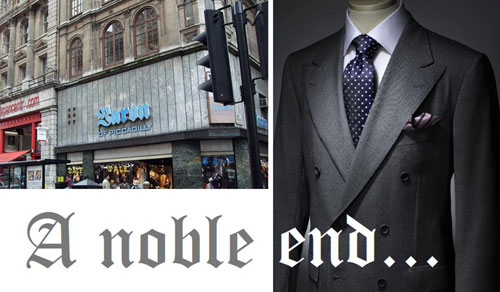 If I am ever seen in bookshops, I am often seen flicking through intriguing nostalgia-picturebooks with titles like ‘Old London’ or, less prosaically, ‘Fallen Grandeur.’ I have an extraordinary appetite for discovering the forgotten and long-since demolished; I experience a bizarre thrill, and often a seething rage, when I look over drawings and turn-of-the-century photographs of magnificent stone edifices, some fifteen or twenty years in construction, that were bulldozed for throwaway reasons such as ‘impractical for modern use’ or ‘ of an unremarkable style.’ I am especially angered when these buildings are replaced with monstrosities that have no aesthetic merit, zero public affection and no link or sympathy with the structures surrounding them.

One of my saddest recent reads was of the old artisan, boutique establishments that began life in the proud imperial age; milliners, countless cobblers, tie-makers and sock makers. Anything that a well-heeled gentleman might require; expertly manufactured and sold by dedicated, passionate tradesmen who knew their craft well. I was sad to read of their demise, their shop closures and takeovers – even though I had never known their trade in my own lifetime. Imagine my ire when I read of the upcoming ‘redevelopment’ (read: demolition) of the eastern corner of Piccadilly and Jermyn Street – an entire block of, yes hotchpotch, but nonetheless charming and idiosyncratic establishments. Most significant among these are the lovely Bates hat shop, virtually unchanged since the 1920s – a remarkable milliner that count David Bowie and Eric Clapton among their customers and, on the Piccadilly side, another time-warp establishment – the suit-and-overcoat shop ‘Baron of Piccadilly.’

Walking into Baron is a disarming experience that could certainly be eased by viewing several episodes of ‘Are You Being Served?’ Firstly, the chap at the desk enquires, politely but with clear intent, as to what you are interested in. Once this has been established, he hails to his relevant colleague (not by their Christian names, but as ‘Mister’) to assist. On the occasion of my entry I wanted to look at the suits.

I was escorted upstairs, which on a Saturday afternoon was sadly completely empty, and was amazed to see a vast treasure trove of classic single and double-breasted woollen suits. More significantly, they had a great number of styles in my size. “You’ve come just at the right time, sir” the suit assistant whispered to me “we’re closing down soon!” It was uttered in an amused hush but you could hear in his voice a slight cracking that indicated an internal mourning; he must have repeated this to every customer who ascended those stairs, but it was clear the words weren’t getting any easier to say.

Many shops are claimed to be ‘old school’ or ‘time-warps’ – anything with an Edwardian interior, mosaic entrance or etched glass windows is considered to be ‘stepping back in time’, but Baron, despite being wedged in a relatively modern 1960s renovation, is the real thing. The kindly service, the formality of payment and the arrangement of the clothing is of a style and a function no longer seen. By the end of 2009, this remarkable establishment will be no more. When I spoke to the manager of the suits about the future, whether Baron intended to pick up another lease nearby he shook his head confidently. “No, this is it for us. We’ll never find another location like this again.” Words to that effect, unfortunately, were also spoken by a representative of Bates.

Baron has, as you would expect, an outstanding closing down sale in progress. Suits, overcoats and accessories, made to a standard no longer seen in that price range, that will surely in time become collectors items. These coming weeks pose a great opportunity to purchase a piece of retailing history – at a bargain price.