Who Are A Little Wise, The Best Fools Be 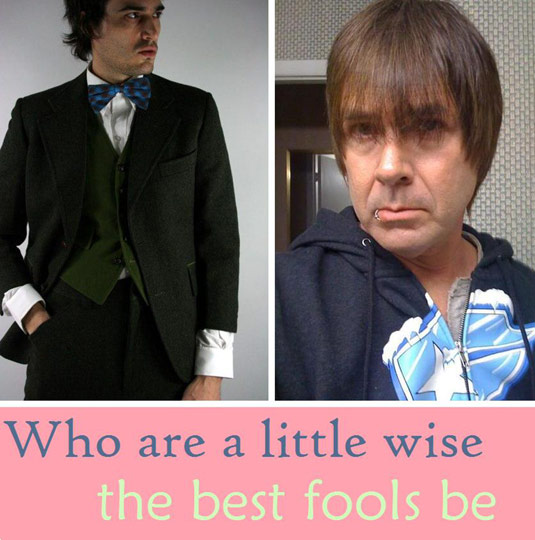 I was once told by an extraordinarily forthright young lady at university that I dressed “as if I were 50.” She sneered at my varsity uniform of burgundy penny loafers, green cords, blood red jumper and green wax Barbour jacket and said; “Maybe you should dress like that when you’re middle-aged. But not now, you’re only 20!” As a statement it affected me more than it should have; after all, there were a number of others dressed in a similar fashion. But at such a tender age, the remarks of the opposite sex – however ill-informed and lacking in taste – echo relentlessly in memory. When I reflect on it, the value of the experience was that it served as a strong example of sartorial ageism.

We all know the phrase “mutton dressed as lamb” and how it is applied. Although middle-aged women are usually the target, men are often criticised for attempting to appear younger than they are by dressing after a fashion that is said to ‘belong’ to the young; a 46 year old in a hooded sweatshirt, baggy jeans and Converse All-Stars will attract ridicule from his own age group and those of others – particularly the group to whom such a uniform is so relevant. But this also applies to a 19 year old in a fedora, tweed suit and college tie cycling along Oxford High Street. It could be generalised that this is simply another example of the populace disliking things that are unusual and suggest individualism, or that the young don’t know anything and are slaves to the compass of popular culture. What is certain is that casually ageist points of view on clothing are tossed around frequently which serves to maintain the clear division between the young and the old.

“There is nothing that ages” a wizened, port-soaked chap once told me “like a hat.” He had gestured to a young man in our midst wearing a trilby with his overcoat and mumbled that if he took it off he’d look ten years younger. I regarded the young man with interest and realised that this wisdom had a greater depth than the dispenser had imagined; put a beanie or a flat-cap on the subject and he’d look younger – replace the trilby with a homburg and he’d look even older. Perceptions of age have a great deal to do with preconceptions about social escalation; the young man is just starting on his journey and so belongs in ‘beginners’ clothing, the middle-aged to elderly man is well into his stride and so is expected to reflect the fruits of his experience and success in his dress, hence, society’s intolerance of precocity in the young and overt preservation of adolescence in the middle-aged.

These two oddballs are at completely opposite ends of the spectrum and often have conflicting views on life; one has never wanted to be young, the other has never wanted to be old. One believes in looking to the past for aesthetic guidance, the other ties themselves to the perennial fashion of youth – whatever that fashion may be. Personality, however, is the guiding star for both; the former reaches out from his rock, the latter clings to it as it crumbles. The question that remains is: which one is the fool?