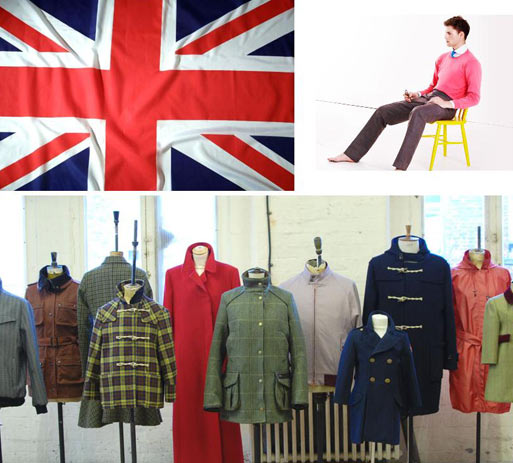 Once you’re on the radar of the PR companies you’re apt to get inundated with invites to new season collections, and this is AW11 preview time. I do accept the odd one or two connected to labels that interest me or from whom I buy stuff. That to me seems reasonable, and doesn’t compromise my independence.

Perhaps the most significant trend I’ve spotted, and one I sincerely hope outlasts a mere season, is the prevalence of ‘Made in Britain’.

Once upon a time cloth and clothing was the very foundation of Britain’s wealth. Sadly the post war years were ones of decline, with the trend in the last two decades for UK labels to outsource to China and India merely hastening that decline.

Many of the problems within the industry were self inflicted; a failure to update old fashioned practices, follow customer trends, and a complete inability to market the product properly were hallmarks of Britain’s industrial decline, and the textile industry was no exception. After all, the Italians managed to maintain a healthy manufacturing sector despite cheaper competition from the Far East.

One also shouldn’t discount the fact that we British are a ruthless people, far less inclined towards sentimentality and patriotism than you might suspect. Not only do British businesses plump for cheaper foreign suppliers and manufacturers with little hesitation, most consumers are quite content to abandon a British brand if they think they can get a better deal elsewhere.

Of course outposts of the British textile manufacture did remain, but these were far from the mainstream. The cloth books of bespoke tailors, and the tailors themselves, seemed the only bulwarks. There were other outposts, firms like John Smedley and Cooper & Stollbrand for example, but they dealt in small volumes for the luxury market. As my visit to John Smedley showed these were far from big operations, and the companies whose cloths they made seemed almost reluctant to broadcast their British credentials. Made in Britain was an afterthought, hidden away on an inside care label.

But the resurgent interest in British bespoke tailoring, the rise of headline grabbing independent labels like Albam, and even small, less well known labels like Jack Russell seemed at least to provide some stability and stop the rot. Indeed, for these businesses ‘Made in Britain’ became their Unique Selling Point (USP), something to boast about, a reason to choose them over the high street with justifiably higher price tags to suit.

Of course one cannot discount the affects of a gradual revulsion, or at least disillusionment, with the more unpleasant side of globalisation. When your clothes are made by children and women in Asian sweatshops and come at the price of human dignity, how ‘cheap’ is cheap? And as the world gets smaller the desire for something authentic, a connection to the clothes we buy, has turned ‘Made in Britain’ into a profitable and desirable attribute.

This move took another leap forward, and struck me as significant, this week with a visit to the AW11 press day for British high-street label Jaeger. When I saw last season’s collection a mere 15% was manufactured in Britain, for this season it’s closer to 50% and rising. What is more, ‘Made in Britain’ is writ large with new prominent labels proudly disclosing the country of manufacture. Manufactured in the same factory as Aquascutum clothing, which isn’t surprising given both are owned by Harold Tillman, the fact that one high street retailer is doing it, and making it such a prominent feature of trade, will likely mean the others follow suit.

Speaking as one who is from tip to toe Made in Britain, this is a high street fashion trend I warmly welcome.