Made To Measure Suiting at Stephan Shirts: Part 2

In the first part I explained why I’d selected Erlend at Stephan Shirts to make my suit, and why I thought it was a cut above normal Made-to-Measure. In this posting I’ll show you what I decided to have made, and explain why.

In some ways selecting a tailor is the easy part. Deciding what to have made is a far more daunting prospect, particularly if your pockets aren’t deep enough to make this a regular occurrence. With so many options it’s difficult to know just what to settle on, and there is always the danger you go overboard. In the art world the saying goes: a painting is never finished, merely abandoned.

One advantage of this preparation was that I was able to e-mail pictures to Erlend in advance, which helped no end in when it came to describing the stylistic features I wanted. 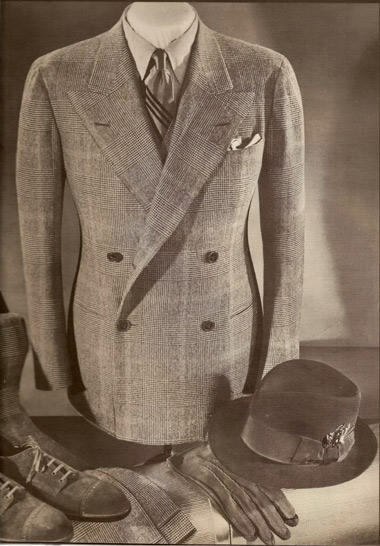 Having thought about what style of suit to go for I finally settled on a double breasted with patch pockets, something of an obsession of mine. Several years ago I found the picture above. It’s a 4×2 DB jacket with a soft role lapel allowing the option of leaving the top button undone in the Kent Style.

This style of suit has numerous potential pitfalls, as highlighted here in an earlier article. But in sort the key is the button placement, which must be absolutely spot on, and high arm holes to lengthen the torso. To this I added soft sloping shoulders in order to better balance the proportions of my head, shoulders and chest. All quite tricky, but both Erlend and I agreed that we should pick something that really tested his made-to-measure service and showed off what he could do. 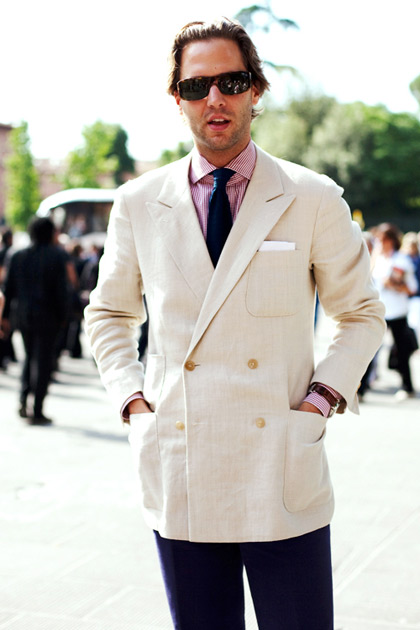 There was another reason for picking this style of suit. I thought it would be easier to break the suit up for multiple uses.

If money is in short supply and bespoke or made-to-measure a rare luxury it’s not a bad idea to commission clothes that can serve multiple purposes. The clothes you have made for you will be your best, and looking your best as often as possible should be the aim.

For a while I’ve wanted a DB jacket I could pair with jeans and chinos for weekend and semi-formal use. This is much easier with patch pockets, and the long sweeping lapel will add a louche casual quality. The chap above was the sort of image I had in mind. Of course for this to work successfully the choice of cloth is all important.

Erlend carries a good range of cloth books encompassing heavy country tweeds to lightweight Italian fabrics. But he prefers to deal in heavier English worsteds, and this suits me just fine. Personally, I don’t like lightweight cloths as they don’t tend sit well on my frame. I contemplated a plain navy worsted, but while that might have given the appearance of being a navy blazer I suspected without brass buttons it would have merely look like a suit jacket missing a pair of trousers. Conversely, a cloth that was too bold might not have worked for a suit which was to be worn in a formal office environment. I therefore chose a 13oz Holland & Sherry navy cloth with subtle grey windowpane check. To ensure that the jacket has a degree or harmony as both a suit and separate I opted for black horn buttons with darker grey seams running through them. Erlend offers plenty of other options in horn or mother of pearl, but next to the cloth these seemed the most appropriate choice.

On the issue of trousers, whether you’re buying bespoke, made-to-measure or off-the-peg it’s a good idea to purchase a spare pair. Even if you wear your suit sparingly the trousers will wear out far quicker than the jacket. But here again I’ve tried to give myself stylistic options, opting for two different styles of trouser. The first will be a classic English double pleat with a fish-tail back (for braces) designed to sit on my waist, and the second will be a flat front, narrow leg trouser with belt loops and larger 2inch turn-ups which will sit below the waist and above the hips. This second pair of trousers is Italian inspired, with the option of wearing a belt to add colour and texture to a look.

Minor details which were added included a British Racing Green lining and fully functioning buttonholes, plus a loop behind the lapel for a boutonniere.

Certainly a demanding commission for poor Erlend, but he was typically calm about it all and understood exactly what I was after. In the final part we’ll see just how well everything turns out.