Suit Styles: More than One Way to Wear a Suit

There is, it is said, more than one way to skin a cat. Not that I, or you, the collective readership should concern ourselves with this grisly practice, but you should note the pleasure of possibility. I had been told, and believed, there was only one way to wear a suit. Englishmen are notoriously arrogant when it comes to suits. Some men believe that because a certain Regency fop is responsible for the shape and style of the modern suit, that the English, as the inventors, are naturally the best.

This is, of course, bunkum. We are never necessarily the best at anything we create; in fact, we are often sub-standard and sometimes appalling. Our lack of success in sports such as soccer, rugby, tennis and cricket are examples of this. Our trains and railways are some of the worst in Europe and the Germans and Swedes produce vacuum cleaners that make ours seem little more than glorified drinking straws.

Though we often, for a freak moment get it incredibly right, in continued development for the next 100 years or so, we sometimes get it badly wrong. The baton has passed on many an occasion to someone else and a lot of sore Englishmen are left with the small pride of the accident of invention.

On occasion, however, we not only get it right at the crucial moment of introduction, we make sure that we keep doing it right, and upgrading where needed to maintain our status as world leaders. The suit is an example of this, and although the English style of suit attire is currently more popular than ever, the Anglo style is not the only one; the cat can be skinned many a way. 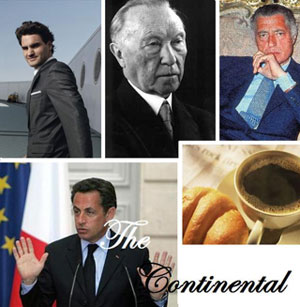 The Continental suit is not a world away from the Englishman suit. It’s rather similar, but then it’s altogether quite a different thing; instead of a chicken roast, it’s chicken with Belgian fries. Usually a two or three button creation, but never double breasted, the Continental suit prefers espresso and croissants to toast and tea. The trousers are narrower and shorter than most suits which gives the Continental the badge of youth.

The materials and patterns are sharp and smart, but never fierce; no pin or chalk stripes. The Continental has been known to sport feint window-check patterns, but usually, cool Brussels blues and Geneva greys are the order of the day. Shirts are generally white and blue; the Continental is a busy man and has no time for choosing natty stripes or charming checks. Collars are either spread or tall, and ties are generally knitted creations in plain dark colours.

Knots are the size of a small pain au chocolat and the cuffs are always double. The Continental does adopt the Englishman affectation of wearing a pocket square, but he restricts himself to ironed white linen – leaving the Ros-bifs to their loud silk paisley. Famous advocates of the Continental include the late Gianni Agnelli, Bernard Arnault and Nicolas Sarkozy. 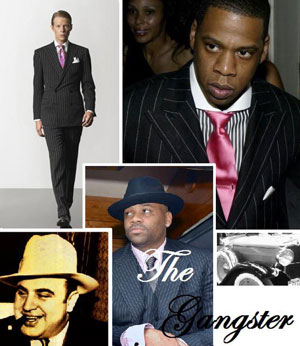 Though he might have replaced his violin case with a briefcase, the Gangster still wants to be noticed. Although a lot of gangsters dressed respectably, initially in a bid to avoid likely arrest, this was taken to an extreme and this look is parodied as the gangster style. Double breasted and three-piece suits are the bread and butter; the Gangster suit is made of some of the most glaring fabrics available to tailors. Loud, contrasting chalk and pinstripes in charcoal grey and midnight blue, the Gangster suit is often made with bright, contrasting linings. Trousers are wider, more similar to Oxford bags of the 1930s in shape.
Shirts ape the Englishman style, but collars are mostly downward pointing. Coloured shirts with white collars are favourites, as are thick stripes, luxurious whites and pinks. Ties are generally colour-matched and though they are often bright, are usually tasteful. No skinny tie for the Gangster; he wants as much silk as he can lay his hands on, and he makes sure people can see it. Tie-pins are a rare, but elegant, accessory and pocket squares are bright and beautiful. Gangster gunners include Ozwald Boateng, Jay Z and Damon Dash. 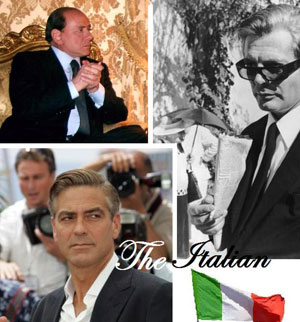 The Italian is a close cousin of the Continental, but unlike his cousin, he respects the Englishman less. For you see, the Italian believes that he is the one true suit; beside him there is no other suit. He is certainly the most removed from the Englishman in terms of fit and style; he is much more relaxed and the trousers are looser and less tailored. The materials are different too. Whereas the Englishman uses thick worsted, the Italian uses fine wool and linen. The Englishman is breakfast at the Ritz and the Italian is brunch at Carluccio’s; he doesn’t need to prove anything.

Shirts are very rarely anything other than crisp white and the collar can be tall and contemporary like the Continental cousin, or soft and classic. The Italian likes to do ties differently too; thick silks in dark tones, tied in square-ish knots are never club-striped but can be dotted. The Italian is sometimes so modern, that he often goes without ties. To offset the shock of this look, he retains the effete pocket square, but he is united with his cousin, the Continental, in restricting himself to ironed white linen. Italian revolutionaries include George Clooney, Tom Ford and, naturally, Silvio Berlusconi.