Mode Rage: Suits at the Races 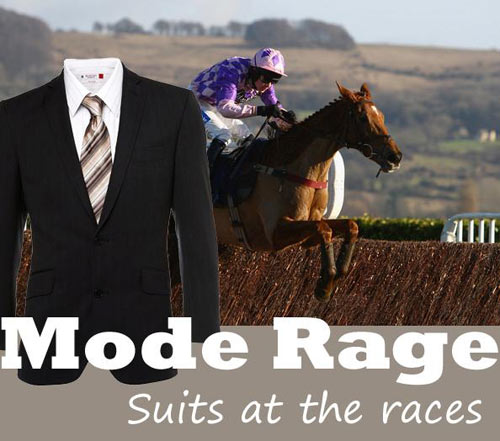 I recently discussed weekend shenanigans with a friend of mine who had been to the races. He had attended the meet in a brown checked tweed jacket, sky blue shirt, blue polka dot tie, patterned blue pocket square, light brown trousers and brown brogues. In other words; the race meeting dress code.

To my dismay, he informed me that the majority of the racegoers had not aligned themselves with this code. “I could count on two hands” he said “the number of men dressed appropriately. They looked like they were all off to the office.” I was further disappointed, though scarcely surprised, to learn that the black-suited majority were sufficiently indelicate and ill informed to cast aspersion and dubious comment at those correctly attired.

When a man knows how to dress appropriately and elegantly for an occasion, it is difficult for even the most pugnacious member of the style ‘illiterati’ to fail to recognise the fact. They do recognise it and it irritates them that someone else was in better possession of knowledge, in firmer grasp of the occasion. They glance at each other’s black and grey Burton suits and no longer feel like the proverbial balls of the bow-wow and so they lash out.

My own experience at race meetings is similar. It is not just the standard of dress that has declined – the absurd length of trousers, the appalling inability to tie a tie properly – but also the aesthetic appropriateness of materials and colours to the occasion. Even those not in possession of a tweed jacket could look to more appropriate garments and colours than a shiny, Mad Men suit from TopMan. A wool flannel blazer or a corduroy jacket, worn with chinos, flannel trousers or a pair of cords are far more appropriate than a grey, black or blue mid-lightweight suit.

Suits are relied upon far too much; the art of the odd jacket and trousers, particularly in relation to country dress, has largely been lost. So impoverished has our daily dress become that the default code for any occasion has been ‘Suits’; weddings, race meetings and the opera, people dredge out the same, slate-grey suit without any concern. When they arrive, they espy someone in classic attire and regard their own dress, and consequently their own negligence of interest, with an inward scorn.

City suits may be one of the last bastions of formality but they are relied upon too much for their ‘top trump value’; the idea that if you turn up in a suit, you certainly won’t be underdressed. Clothing is too often considered in a vertical hierarchy and almost never considered laterally with regard to the occasion, the location and the environment.

Some blame the loss of social propriety, others point to the lack of useful signage – one of the most useful things about the oft-mentioned Esquire artwork of the early 20th century is the guidance it provided to clueless readers – but the reality is that the appropriate attire for a country weekend at the racetrack has never really been forgotten, as the compliments to my friend from female racegoers proved. And the fact that the suited gentlemen wanted to try his jacket on and approved of the fit and style once it was warming their own shoulders, shows that aesthetic differences are not significant. The problems are knowledge and application; the former is restricted by a lack of interest, the latter by a lack of confidence. Fortunately, neither are insuperable barriers. The campaign continues.