Hats for The Modern Gentlemen

“Strange” wrote Graham Greene, in relation to his character Henry Miles, “how much dignity there can be in a hat. Without it he looked like one of the anonymous, the dispossessed.” From a 1951 perspective Mr Greene’s observation is accurate; hats were everyday accessories of gentlemen and barrow boys alike. Men of purpose and place had headgear.

However, in the late 1960s and early 70s, perceptions of acceptable fashion changed considerably, and hats became embarrassing, almost comical reminders of what once was. By the 1980s, hats had all but vanished from the radar of everyday fashion for men; baseball caps were sported by tennis shoe CEO’s, and bowler hats by quaint old City stockbrokers, but the covering of the head on the street was a minority activity.

I doubt hats will ever regain the importance that they held for our ancestors in terms of fashion or comfort. The daily hat, once as much a part of our outward appearance as shoes or a pair of underpants, has died a death.

Being a dramatic at heart, I adore hats. I wish I could wear them better, and more often. I last wore a proper woven-fedora this summer, when the hot sunshine and high-spirits excused eccentricity. However, I have taken up hat-wearing quite seriously this autumn; a particularly cold end to September has forced me to cover my head. Here are some tips if you are experiencing blustery weather and feel ever the daredevil to show the world some chapeau chic.

The hat of choice for the film noir gumshoe, the pinstriped gangsters of yore, and more recently, on occasion, Kate Moss, fedoras and trilbies are rarely seen these days. Race meetings such as the Grand National at Aintree are events at which this hat can enjoy ubiquity, elsewhere one will find that they are a mark of self-conscious individualism. Wearing them with putty mackintosh raincoats will look a little too Forties Hollywood, however, they can add effortless dash to an otherwise ordinary outfit. I have seen gentlemen wearing double breasted suits with dark fedoras. This combination is a little theatrical, but is very endearing and certainly does add that sprinkle of dignity. 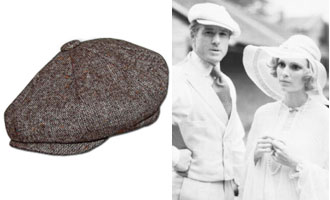 “Read all about it!” is the dull cliché phrase I have been assaulted with when wearing my own version of this hat. However, when worn with the right outfit; a corduroy two-button jacket, grey flannel trousers and chestnut brogues, for example, few will look as complete or wholesome. Much maligned for its association with baker boys and newsboys, I think many forget that it has also been worn by professional golfers   and the fictional character Jay Gatbsy. Such associations romanticise the headgear for me, and I enjoy the jaunty and youthful nature of it. Different to the fedora or trilby, it softens a look wonderfully well.

The beanie, although a structureless, poor excuse for a ‘hat’ is worthy of a mention as being a major part of modern headgear. The very practical and casual hat, which originated as warm protection for labourers in cold weather, is now frequently worn for winter sporting activities and in very cold weather in both bucolic and metropolitan situations. Although hardly elegant, it is a very useful and sometimes charming item of headgear which looks good when worn with looser and more casual outfits. Burberry Prorsum designer Christopher Bailey once teamed the oversized beanie with elegant single and double breasted suits for an eclectic yet very appealing look. Go for plain, darker colours and always wear oversized beanies down to the eyebrow.