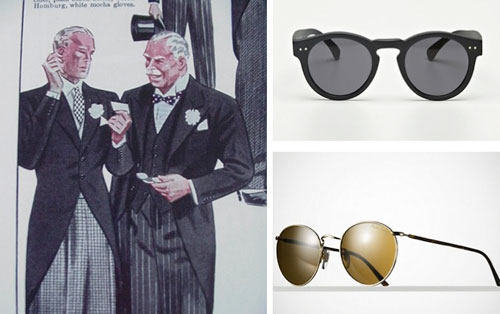 “I am attending a wedding this summer. I am wearing very traditional morning dress, with a double-breasted waistcoat, pin-contrast collar shirt, silver tie and pocket watch. The only thing is, I am not wearing a top hat as I don’t own a decent silk one – and wouldn’t be seen dead in a felt one – which means, if the weather is fine, that I’ll be perpetually squinting. My question to you is, can I wear sunglasses with traditional morning dress or is it a no-no? And if I can, what kind can I wear?”

One of the problems with wearing modified versions of Victorian and Edwardian dress, beautiful though they are, is their relative inadaptability to the sort of accessory that we take for granted. Morning dress has changed little since the turn of the twentieth century, and yet so much has happened in between – socially and sartorially.

In 1900, men would have waited patiently at the church and bided their time by blinking at their pocket watches or reading through the days races in the paper; in 2013 men take ‘selfies’, update their Facebook status to ‘It’s about to go down – at St Mary the Saviour’ and Tweet embarrassing pictures of the groom. To say it’s a different ball game is an understatement. However, different as it may be, tradition is still desired for this most ancient of rituals.

I, like the reader who posed the question, love the costume theatre of a wedding. Modernists might well vomit at the thought of a man in a penguin-suit getting married to a meringue – who, coincidentally, is often about as ‘virginal’ as a Kardashian – but there is something about such ceremony that affirms the sense of occasion, and consequently, the gravity of the commitment.

And, like the above reader, I also tend to wear traditional morning dress (but with a tie, not a cravat). However, it is easy to forget the sartorial changes that have happened since morning dress became the sine qua non of elegant weddings, one of the most interesting being the common adoption of sunglasses to social events.

Though certainly optional, sunglasses are often indispensible at summer weddings. To glorify the day, the bride and groom often spend as much time outside as possible, with the result that their guests depart a gloomy church into blinding sunshine with only the brims of their hats to protect them. Even a top-hatted guest would find it hard to resist scrunching their face up in the midday sun. Therefore, sunglasses – should the occasion call for it – are entirely acceptable.

However, ‘taste’ – that elusive quality of upbringing and experience – dictates that some sunglasses are more appropriate than others, particularly when pin-collared shirts, DB waistcoats and pocket watches are thrown in as counterweights.

First the ‘no’ category; mirrored glasses, aviators, Oakleys and Maui Jims. There’s no two ways about it, these glasses look awful with morning dress. I remember seeing an attendee of a royal wedding sporting mirrored Oakleys with bespoke morning dress, thinking how unattractive the combination was. It was as though he was trying to make up for the elegance of his attire: ‘I’m good fun and kind of surfer-dude up here – forget what I’m wearing down there, I just do what I’m told.’

Aviators are attractive glasses, but they are more suited to sports and casual wear; don’t try to look cool at weddings, it’s far more appropriate to look elegant.

One pair of glasses that will work with morning dress are round acetate glasses in black or faux tortoise; the roundness recalls the original shape of popular sunglasses in the early twentieth century. Black is more formal; the above pair are available from Steven Alan.

Another pair to try are the ‘Retro Round’ from Ralph Lauren Purple Label in polished metal with gold lenses. They’re not quite as geeky as the hippy, Lennon-lenses and they have a charming, vintage character.