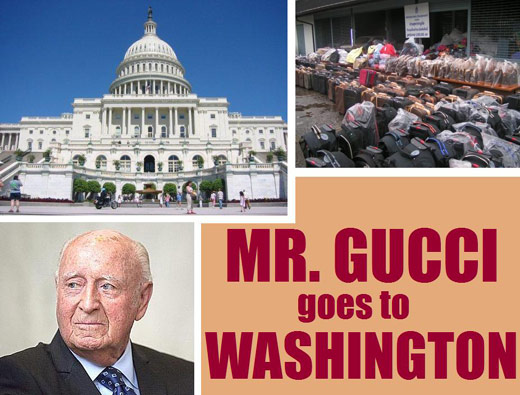 Capitol Hill is not the first place you’d associate with a scion of a Florentine luxury goods empire. And yet this is where Giorgio Gucci, heir to the Gucci fortune, was to be found attending a forum discussion on the issue of intellectual property rights in the fashion industry with US government bigwigs. Unfortunately for Signor Gucci, his luggage had gone missing; whilst US Airways scrambled around in an attempt to locate it he was forced to attend the event in, rumour has it, a $450 suit from JoS. A. Bank, a menswear retailer of precisely the same vintage as Gucci (both were established in 1905).

However the indignity may have affected Signor Gucci, it didn’t show. He delivered impassioned pleas about the evil of counterfeit goods, dropping in classic lines about child-slavery and terrorism – themes which carry extraordinary weight on this side of the Atlantic – and he even managed to persuade attendees that the mark of true love is a man who digs deep to buy “the real thing.” The implication being that a man who buys a knock-off not only irreparably harms the youth of the developing world and assists in the destruction of the free world but also reveals that his affection for his lady love is a fraudulent sham.

It was a virtuoso performance from a seasoned marketing shaman. The problem with these Frankensteinian fashion houses is that they expect sympathy when they lose control over their ‘creations.’ The issue is that people who purchase fakes are often people who don’t, mostly by their own admission, actually know an awful lot about design and respond, with impressive honesty, that they buy something for the appearance of wealth and exclusivity; as long as the handbag doesn’t collapse, they’d rather pay a fraction of what the ludicrously overpriced designer version costs.

Fashion is too transient for the ordinary woman or man to buy the ‘it’ bag of the season year in year out; if products were more honestly priced there would be less incentive to buy the fake. Consequently, product desirability would fall as the moderately priced good would be less prized. This would diminish the incentive for counterfeiters. The problem with Gucci, Vuitton and the rest is that they’re not, as they claim, trying to shelter the creativity of their designers but simply enforce their own intellectual property rights; their disingenuousness in this regard does them no favours.

The incident of Giorgio Gucci’s Jos. A. Bank adventure perfectly illustrates the vast gulf in what is and what is perceived to be in the fashion world; Jos. A. Bank might not be the most glamorous, high-end retailer but there didn’t appear to be much wrong with the suit. An expert might have noted certain imperfections but legions of luvvies, had they not been informed of the incident, might well have assumed that the garment he wore was Italian and certainly more than the price he paid for it. Instead, they gushed sympathy for Gucci’s lot in having to ‘descend’ to such a retailer. If he wasn’t in town to represent an industry of such mind-boggling double-standards he might have brushed off the pats of sympathy and revealed his relative satisfaction with the product. But the heir to Gucci, international champion of logos and protector of the luxury goods colossi, was silent.