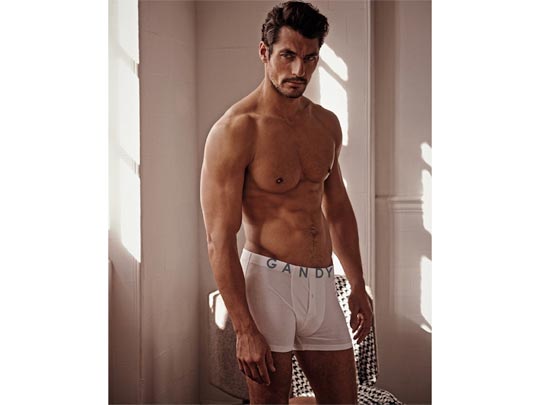 Missed opportunity. There are few sadder words in the English language. “Too late” is heartbreaking; “gone forever” is, frankly miserable.

I was ruminating on these maudlin notes when viewing the much ballyhooed and heavily marketed underwear collection created by David Gandy for Marks & Spencer. The story of the product is that Gandy, a male model – reputed to be the world’s most successful – has, for a price, lent his name and experience to one of the British high street’s most famous, and sadly troubled, retailers.

However, as slight as it sounds, the model’s offering in this trade isn’t insignificant. His experience has its uses; Gandy has often been snapped wearing very little and so his knowledge of lycra cotton underwear is, no doubt, exceptionally useful.

But when all is said and done, it’s his name that M&S are paying for. “But who’s Gandy?” many of you may cry.

Fair question. And one likely to be asked by most of Marks & Spencer’s most loyal customers. For all the bleating M&S can do about Gandy’s leather bound books and his rich mahogany scented home, he means diddly squat to the average John Bull frantically rummaging the underwear racks.

And here we get to the heart of the problem.

The demographic profile of the average Marks & Spencer underwear shopper is not that of the Calvin Klein underwear shopper. He is generally likely to be price sensitive, buy plain underwear in bulk and see celebrity-endorsed knickers as a merry con.

However, the Calvin Klein shopper might be more susceptible to trends and famous people slapping their names on a pair of tighty whiteys. Bjorn Borg, the Swedish former tennis champ, might have tempted him with his hypercoloured retro designs and name stretched across the waistband.

The issue is, he doesn’t really shop at Marks & Spencer. He knows who Gandy is, and might even have bought a pair of Dolce pants on the back of those sweaty-pec D&G adverts. “Oh wow” he might say “Gandy’s done his own underwear. Nice.” He might even entertain the thought of buying a few pairs, uploading on Instagram, telling his followers: “Check it out – Gandy’s pants. Need a few more pairs – and some more gym time!”

However, for all the guff about quality and details, there’s not much that can draw him into a buying frenzy. It would have been quite cool to have a pair of Gandy pants, but they’re just so…ordinary. Nothing. No quirkiness, no outlandish design or statement. Just quiet, white pants with a small, grey, embarrassed logo identifying the namesake.

My first reaction was of incredulity. It’s true that most M&S existing buyers wouldn’t like a pair of tight, D&G-esque pants with ‘GANDY’ stretched across the waistband. After all, they like Rich Tea biscuits, still listen to the cricket on the radio and own picnic chairs. But then they wouldn’t be the target anyway because they wouldn’t pay £20 for two pairs when they could get five pairs for the same amount of money, simply because a male model they’ve never heard of helped design the collection.

M&S could have pushed the boat out, stretched the brief (pun intended) to be targeted at the kind of fashion brigade who aren’t generally seen within 3 miles of M&S menswear. Create a sensation, get the TopMan-cum-Reiss crowd fighting over a pair; have the 20-something girls giggling in excitement as they take off their lover’s shirts to reveal the model hunk’s name emblazoned across the waistband.

The collection is nothing without his name – and yet the retailer has made such little use of it. A missed opportunity indeed.