My Favourite Things: A Look Forward to Spring 2009

I have never been an advocate for fashion slavery. Fashion can be quirky and surprising, even delightful but it’s an expensive pursuit for one to follow religiously. It also has the disadvantage of lacking permanence; the essence of fashion is that reliance on the idea of perpetual transition, continual evolution.

However, while I have long been a supporter of ‘sartorial allotments’; building and cultivating a long lasting personal style, fashion cycles are pleasantly diverting.
I was rather pleasantly surprised by some of the offerings at the Spring 2009 collections. There was a good deal of the yawn-factor; muted tones on tones, an overkill of chic-bohemia but there were some particularly pleasant individual ensembles and some aesthetically charming pairings. 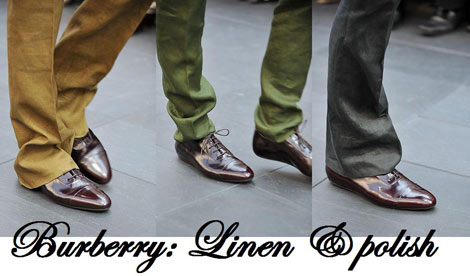 The appeal of linen, about which I have written at length, is evident here and accentuated by the glorious colour and polish of the footwear. The contrast in texture and the aesthetic cut of the trousers is particularly appealing but the marriage of the shoe and the trouser is the real magic; fresh but somehow remarkably traditional.

Linen trousers are hardly anything new but most chaps wear them very casually – even unironed. Secondly, they are often worn with careless and dreary examples of footwear; this combination shows how outstanding a casual summer trouser can look. 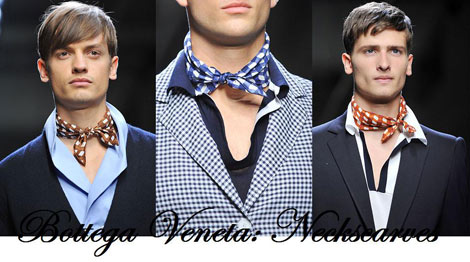 The neckscarf is an excellent accessory for spring and summer; a dab of colour, a little formality, whimsy and, importantly, balance for ensembles. Some might view it as a little too ‘dandy’ and affected, but these examples from Bottega Veneta show how a rather ordinary outfit can be lifted by a little colour and pattern around the neck. The retro check is particularly attractive. 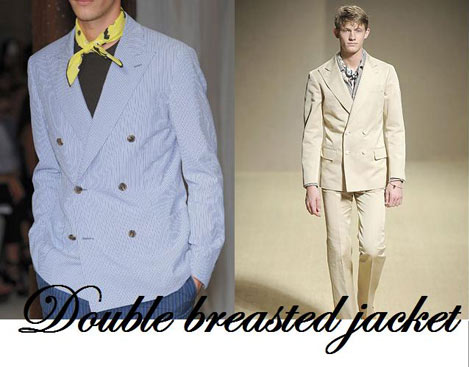 This appears to be making a comeback and it’s certainly long overdue. A stylish double-breasted jacket has been missing from high fashion, and consequently the adaptive (even plagiarising) chains on the high street; hopefully this means more affordable versions will follow. Its elegance lifts pedestrian and even lacklustre pieces to a fine level of nattiness. 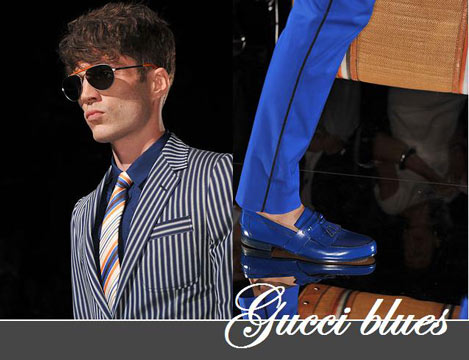 Frida Giannini is evidently not ashamed of exploitation. The Gucci name, so powerful and influential that shoppers queue from the early hours on discount days to ‘grab a piece of the action’ as one Selfridge’s shopper aptly put it as she scrambled past the velvet ropes outside the concession in the sales. And Giannini knows this. Consequently, the Gucci runways do have a fair amount of branded tack, relevant for the materialist-glutton in the scowling Ferrari. Ms Giannini often throws a lot of very average and forgettable sportswear onto the runways, but she clearly has talent. The beginning of the Spring 2009 collection seems encouraging; pale and interesting summer suits, wacky floral shoes and a good deal of blue (it seems I frequently forget what a marvellous colour it is).