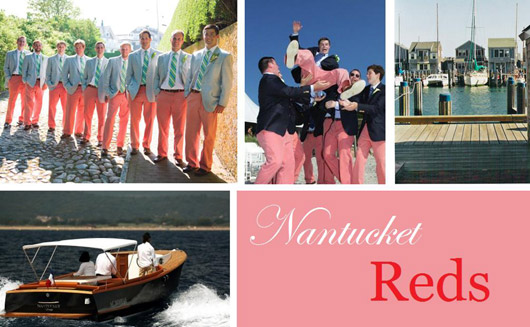 When I skimmed through a comment on my blog, asking me my knowledge of ‘Nantucket Reds’, I initially thought I was being asked a question about an American sports team. Realising that this regular reader could not have mistaken me for a baseball pundit, I read more closely and saw that Nantucket Reds are actually a style of trouser, worn in the summer, predominantly by residents of the affluent, picture-perfect islands of Nantucket and Martha’s Vineyard, on America’s eastern seaboard. I know little of this part of America, to my great shame, and so I endeavoured to understand more about this tradition.

Like many peculiar items of clothing, the history is far more interesting than the product itself. The trousers are simply a light red in colour, which fades to a light pink with age; a fact which I consider scarcely revolutionary. According to Murray’s Toggery, apparently the original and official retailer of ‘Nantucket Reds’, “It all began when the store started selling distinctively brick-red sailcloth slacks in the 1940s. The pants became so popular, Philip C. Murray named and trademarked them ‘Nantucket Reds.’”

Other information suggests that the style was borrowed from the uniform of the New York Yacht Club and that the original retailer found some cheap red sail cloth in Boston to sell to nautically minded residents and, more importantly, visitors to the island, although this seems to produce a chicken and egg argument that is founded on the basis that the New York Yacht Club actually adopted this as the uniform of Nantucket  because the yachting elite that swanned around in Manhattan wanted to show everyone else that they “summered on Nantucket.”

The material is apparently like sailcloth, tough and stiff, and it takes some time to wear it down to the soft pink that says “I’ve been wearing Nantucket Reds for years.” In order to combat this, new owners apparently resort to bizarre and excessive washing methods; putting items in the dishwasher, hosing them down and leaving them out to dry in the summer sunshine, soaking them for great lengths of time – all attempts to fast-forward to the exclusivity of pink, to give all the impression of a Cape Cod aristocrat. As one person commented on Ivy Style; “The Nantucket Red pants give me the confidance [sic] I need to go in public and look like a million bucks!”

Now seen as a souvenir item of the island, they are still considered a preppy classic and still convey an “Oh ya, I’ve been there” nonchalance which seems to delight, and irritate, in equal measure. Am I taken with them? Aesthetically yes, they are appealing. I envisage, quite happily, a faded pair of tough pink trousers with an immaculate navy blazer and a pair of tassel loafers – contrasts in texture – and I have no objection to wearing pink like many of the envious detractors of the fashion. However, I do get the feeling that someone who knows a great deal more than me about the American elite, the yachting social scene and the fascinating credence of ‘summering’ in a particular place in America, will ask me by what right I have to wear something of which I know so little.