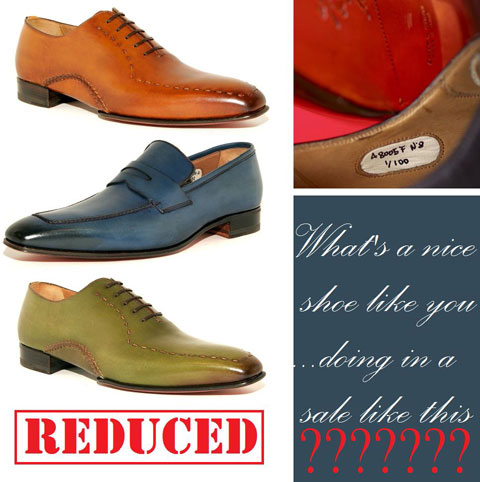 Trawling through the sales at department stores such as Selfridges and Harrods is no happy experience. Harrods is generally unbearable even out-of-season but smack bang in the middle of the January sales it is a tortuous whirligig that manages to make me feel physically ill. If you sell ‘all things for all people’ then you should certainly expect the latter when you offer the former for a greatly reduced price; expect them to push, expect them to shove, trample and snatch.

As much preparation time as they are afforded (virtually the entire calendar year) it is remarkable how consistently chaotic and zoo-like such establishments become in the weeks after Christmas. What is even more incredible is that the stock which, at any other time, is treated by staff with a reverence and protection causing customers to wonder whether they have stumbled into a museum by mistake, is suddenly no longer worthy of the ‘touché-pas’ pedestals; magnificently overpriced baubles, bags and beads, no longer behind glass, are left to the mercy of bargain-thirsty shoppers who rifle through stock piles and scarf bins like primates dismantling an automobile.

It was amongst this mess that I found some of the most splendid examples of footwear I have ever seen. It was an uncanny setting; dumped alongside some of the most vulgar (D&G flipflops) and absurd (Dior trainers) aberrations of shoemaking, they shone with a peculiar quality that set them apart from all other examples. They reminded me of the bespoke examples that sat in the window of Foster & Son or Cleverley with a patina to the leather reminiscent of antique furniture and a shape, classic yet contemporary, that distinguished them from the winkle-pickers and square toes that surrounded them.

The style of the shoes, though slightly fantastical (imagine Tim Burton conjuring a film about a cobbler) is beautiful to behold; the only thing that prevented me from purchasing a pair was the still-prohibitive sale price of £550 (reduced from £800). A pair of the green (yes, green) crocodile shoes, originally £5,000, were reduced to £3,500.

The Stefano and Mario Limited Edition Line is produced by the well known Italian shoe company, Stemar. It would be a disservice to say they are ‘manufactured.’ Manufacture is a cheap and greasy term that invokes a sense of scale and the Stefano and Mario collection, with only 100 pairs of each style produced each season, can hardly be considered an operation of ‘scale.’ According to Stemar it takes approximately 4 weeks to produce an “unfinished shoe” – “15 days during which the shoe must remain in the last, and at least a couple of days for finishing and polishing.”

And indeed, it is the finishing and polishing that distinguishes these shoes; “painted” Stemar say “like works of art.” Firstly, the skin is massaged with cream and a soft cloth. This is followed by days of patient polishing – a technique corroborated by a gentleman at Cleverley who informed me that the ‘old furniture’ look is about using different tones of polish and takes “a very, very long time” – and then the shoes are ironed by hand and naturally waxed to give them a deep shine. The result, as Stemar states, is a “superb pair of shoes” with deep coloured veins “…intense, artistic, just like an oil painting: hues of chestnut, brandy, walnut, hot orange, forest green and mocha.”

Besides being available at Harrods and Selfridges, they are also offered for sale in Milan, Florence and Rome, Paris, Montreux, Istanbul, New York, San Francisco, Enschede and Laren (Holland) and, interestingly, in Lagos, Nigeria, Tomsk in Russia and, perhaps appropriately, a store in Kiev called ‘Rich Boutique.’