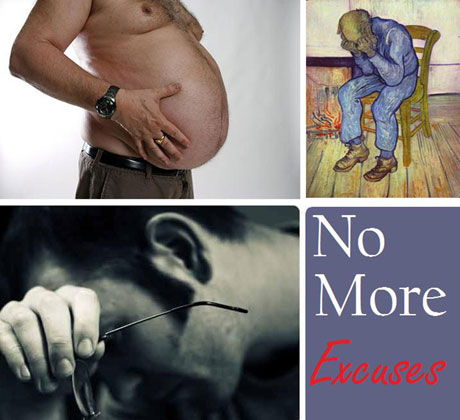 I cannot help but feel utter dismay when a chap provides a feeble excuse. For one thing, chaps who do nothing but excuse themselves are generally excused the courtesy of being referred to as a gentleman; a gentleman is not a soppy avoidance artiste, a blamer, a finger pointer or a self-indulgent weeper. In relation to clothing, this ‘I am excused’ culture is particularly annoying. For every man who ticks me off for being an overdressed popinjay there is some hand-wringing beetle-browed whiner who complains that I am simply genetically fortunate to be able to wear the clothes I do. These persons then point out that I am thinner than they are, younger than they are, healthier than they are, luckier than they are – ad nauseum. The problem is not that they are anything they claim (without a shred of evidence). The problem is that they are unwilling to look at themselves as anything else.

‘I’m old now. Nothing looks good on me.’

Men are fortunate in that as they age, they can often become even more attractive than they were in their youth. George Clooney is a splendid example of this. Buying clothing to make you look younger is not an exercise of copying exactly what younger people are wearing; the ‘trendy’ middle-aged chap will lack dignity and his adherence to fashion will not cause him to ‘lose years’ – it will give the impression that he lacks conviction and self-belief, which for a man in this prime of life is rather tragic.

To look younger in delivery rather than fashion is the key. He should purchase one or two buttoned suits, staying away from fuddy duddy double-breasted blazers, and he should avoid ‘comfortable’ footwear in favour of smart and sleek kickers from good manufacturers such as Church’s or Crockett & Jones – there is nothing more aging than a pair of shoes bought for ‘bunion relief.’ Blue shirts are fantastic in stripping years; especially crisp royal and cornflower blues and cutaway or spread collars are the most youthful and optimistic. Playful little touches such as a matching pocket square or bright red socks will give a man an air of light-hearted distinction, which is certainly attractive.

‘I’m too fat to care or look good in clothes.’

Using stripes is one of the most effective methods of illusory svelte-ness; the eye follows the stripes down the body, rather than across it which makes a chap seem taller and, consequently, slimmer and wearing waistcoats with suits actually helps contain and conceal girth; there is no visible overspill as the belt line is hidden.

Also, keep trousers straight fitting with no pleats; ‘double pleats’ have a tendency to make a man look fatter in thigh. Shoes should be as slim as possible, and wear a lot of black and navy blue – such dark tones are famous for their slimming effect. Overall, a man should try to keep his clothes ‘fitted’. Baggy clothes worn over bodily bulk has the effect of increasing girth. Finally, keeping outerwear long, dark and tailored covers awkward areas which might be revealed when wearing sporty, short fitting outer jackets.

‘I’ve got no one to dress for anymore.’

I think those in relationships tend to lose a little vanity and they care less about keeping abreast of style changes. Although a cosy marriage can mean that a loving wife appreciates you equally in pyjamas as in white tie and tails, this philosophy is obsolete when the partnership comes crashing down. It is important in this circumstance to start paying attention to your self once more. Though many people might never marry again, as far as the world is concerned you are ‘back on the market’. I would suggest an avoidance of ‘comfort clothing’; the sort of tatty, worn items that were perfect for a Sunday afternoon during the heady days of connubial bliss. It is important to reignite a little self-admiration, so sticking to classics and concentrating on fit and colour is paramount. Well fitting and well-matched clothes suit almost anyone that wears them and, to give your look a little boost, try wearing bright, eye-catching colours and patterns. However, overdoing this can be disastrous; excessive patterning and colour looks desperate, which is extremely unattractive. I think one must look sleek and well-coordinated and yet surprisingly cheerful.