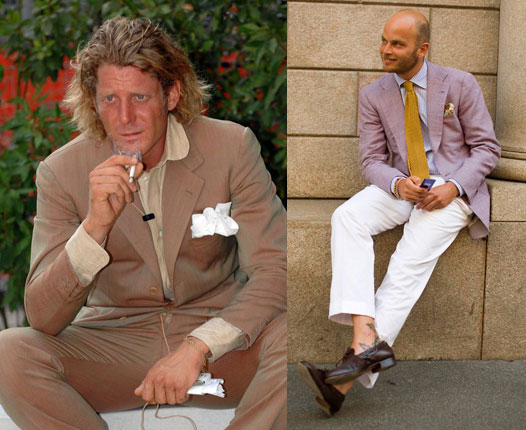 Ask a woman who they believe the most stylish men in the world to be and the answer is rarely different: “Italians!” they gush “Definitely Italians!”

This can be rather a sore point for British men, particularly those who take care of themselves in grooming and attire, who battle against the enormously unhelpful weather in entirely impractical threads in order to cut a dash for old Blighty. “What about British men!?” their inner conscience screams “what the hell has a Brit got to do to impress upon women that British men have great style?!”

The answer, it would seem, comes down to sex.

It’s very simple; the average Italian adult male, sometimes but by no means always better looking than his British counterpart, brings sex appeal to his sartorial deportment. When women judge a man’s style, they aren’t judging him by the standards of StyleForum bloggers, crusty Savile Row cutters or ancient doyennes of ‘classic menswear’ – they’re judging him as a man, plain and simple.

“So what?” I imagine some will be saying “Who cares what women think? I know my Anderson & Sheppard is one of the finest pieces of craftsmanship going and I don’t give a damn what the females’ opinions are.”

Natural style, fundamentally, is not about clothes or craftsmanship but about the person and the way in which they convey their sexuality.

Humans are designed to appeal as sexual creatures and the more successful you are in conveying your sexuality, the more attractive you are. Let’s face it, we have to dress; climate and legislation prevent public nudity. Therefore, we need to convey our sex appeal – however faded it might be – through attire.

Take Lapo Elkann and Luca Rubinacci as two classic and well-known examples of well-dressed Italians. If style ‘aficionados’ met them, they would I am sure have many questions. And I would wager that most of them would be utterly inconsequential; “Who makes the best soft-shouldered suits? Which bespoke shoemaker do you favour above all? What is your view on wearing odd waistcoats with suits?”

The point is that Elkann and Rubinacci could walk through H&M, Zara and even Primark and come out on the other side conveying more sex appeal and natural, innate style than any British iGent dusting off the shoulder of his expensive blazer outside Chittleborough & Morgan.

And they can do this because they understand how to bring the man they are to the fore in everything they wear. Sexiness is about owning and belonging in a look and, as Amies recommended, not obsessing over it. And it’s not about being good looking enough to look good in anything either; beauty is in the eye of the beholder.

Italians are gushed over because, for want of a less graphic image, they thrust their manhood into their ensembles. The way that the billionaire Elkann nonchalantly wanders around in unbuttoned hand-me-down DB jackets, a cigarette dangling from his lips is gruff, sex-laden style. He couldn’t give two hoots about which craftsman roped his shoulder, whether his jacket arm is creased in pictures or whether the hem of his jackets drop perfectly into his palms.

British men, and in fact Anglo-Saxons in general, approach clothing as a sexless science, which stultifies the overall purpose to bring forth the sexual image of the wearer and make them more attractive. I was greatly intrigued by the statement of the American Anglophile Sean Crowley, Ralph Lauren tie designer and fellow ‘I Am Dandy’ subject, who stated that he was using Hugh Laurie as Bertie Wooster for style inspiration for the purpose of ‘unsexing’ clothing.

There can be, in my opinion, no greater indictment of the perception of British style.

The Savile Row-John Steed British Style School of Perfection is about brushing off wrinkle-free suits, tucking in traditional shirts, following ancient rules, firming the upper lip and generally, stiffening, starching and unsexing anything in sight. If it errs on the side of anything, it’s fabric and construction – not style or sex appeal. Above all, it worships time, dedication, purity and elitism.

The Italian school is very different. They appreciate and admire quality, but they have the gaggles of girls a-giggling because they get what it’s really all about: making the best of anything they wear and understanding the importance of sex. It might come across as loucheness, untidiness or faddishness but sprezzatura is an Italian word for a reason; a truly stylish man should be able to wear anything and look good. And not for the dogmatic classic style high-priests, bespoke addicts and tailors but for the majority of people who pass by, of either gender, and vocally or visually acknowledge.

For my money, there is no greater compliment than being considered to be, whilst trussed up in a suit, overcoat and scarf – all the elements of a potentially sexless ensemble – sexually appealing.