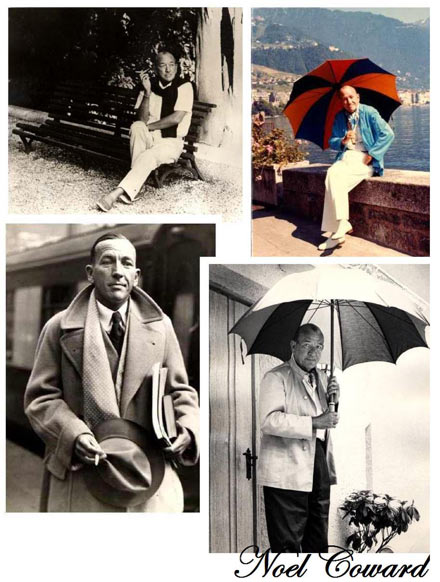 The artistic polymath Noel Coward was also one of the most desired and admired men of his day. A playwright, award winning actor, composer and society wit, Coward was the living exemplar of a Hollywood super-character; suave, clever and wickedly talented.

He was also one of the leaders of fashion and his high position of influence meant that his particular interpretive chic was followed by many men who would, had he not been Noel Coward, probably not have allowed themselves to be persuaded so.
Coward was flamboyant, and his wardrobe was no exception to this. Not garish and gaudy like a Quentin Crisp, Coward’s style was sleeker and less baroque. He had idiosyncrasies to be sure; white shoes were a favourite of his, as were large almost clown-like bow ties but he was never inflexible.

His style changes throughout the decades of his life display his openness to fashion and new ideas. In photographs of Noel Coward, at the height of his powers in the 1930s or towards the end of his career, and his life, in the 1970s, you get a sense that Coward was enjoying himself all the way. At no point do you look at him and see a defeated man; an embittered oldie who has let the world go by. He looks thoroughly active; taking part, mixing in and providing creativity all the way.

In addition to his artistry of dress, Coward had a knack for posing. Never shy of the camera, some of his portraits are works of art; sitting or standing, Coward gestures and throws mordant smiles at the lens.

Coward is often credited with being a 20th century dandy. Alongside the other candidates however, Coward shines. He was never foppish nor brassy, and his jaunty style was always in good humour and was as much a part of him as the witty melodies running through his mind. Other modern dandies have tended to mock dandyism, taking the meaning of the word to a tasteless extreme. Coward’s part in fashion was rather like that of Brummell’s; a modernity that doesn’t look too modern, an elegance that doesn’t look like ornamentation. Coward couldn’t abide vulgarity and often spoke of his friend and contemporary rival Ivor Novello as a talented man, one capable of being “violently glamorous” but also a “little vulgar.”

Coward was all about discretion and taste; a thoroughly English gentleman who put his best foot forward. He is likely to be remembered, fortunately, for what he gave to the world. As long as his name is muttered approvingly by generation upon generation of devotees, the world will be exposed to the unique and entertaining personality he was; an icon in all the best denotations of the word.