On My Soap Box: Cutesy Ties

To avoid repeating things already said I recently flick through some past articles by fellow columnists.

I was particularly struck by Winston’s harangue of men who wear Printed T-shirts. I have some sympathy for his point of view, but it would be hypocritical of me to fully endorse his stance given I have previously championed, and still do, London based Weadmire.net.

However, it did bring to the surface my own latent hatred for one item of clothing in particular. No, not those jeans which require your arse to be hanging out over the waistband and the belt ratchet around your thighs to stop them meeting your ankles. No, my own personal loathing is for a garment which many men may already have sitting in their wardrobe.

I’m speaking of cutesy printed ties with animals, plants and all manner of childlike crap upon them; the sort frequently offered up by Hermes, Thomas Pink and most notably Vineyard Vines. 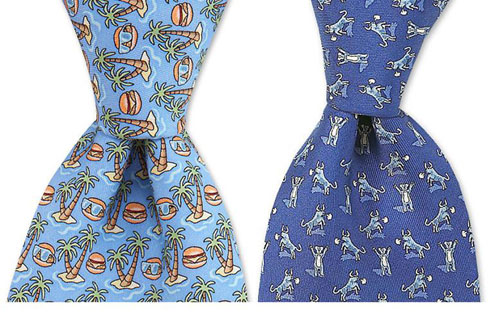 I’ve always thought of a tie as part tool and part expression of personality. The problem I have is that as a tool to building a look I just don’t get the aesthetic, even from a distance. As an expression of personality I’m even more perplexed, just what exactly is it you’re trying to say: I’m a child at heart, I like hippos, I’m wacky, my wife buys my ties!

Even as an act of rebellion I’m sceptical that it works. If you care not about fashion, style or dress why not simply wear plain black or blue ties. You can’t get much simpler. Ultimately such an excuse is a lie given that these ties are for the most part brightly coloured, and you must possess some interest in clothes to able to match with anything.

I have wondered, given the success of Vineyard Vines in particular, whether there was some cultural significance that I was missing. 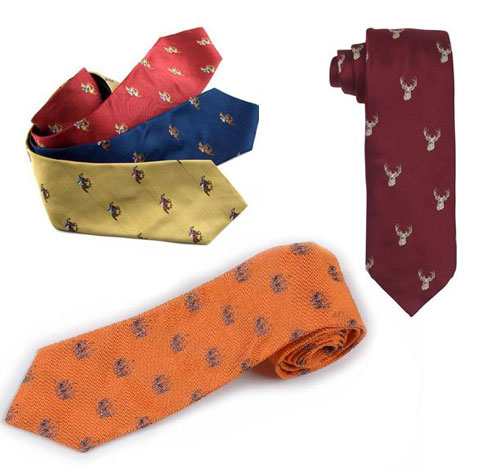 There is a respectable tradition in the UK of sporting motifs on ties, intimately bound up in British class consciousness. Typically, patterns incorporate stags, foxes, pheasants, fish and horses, all highlighting country pursuits, and natural accessories to tweeds and country clothing. Good examples of these can be found at the excellent A. Hume with their Atkinsons Irish Poplin, Farlows, Roderick Charles and London’s Polistas.

While this latter illustration is an aesthetic I can appreciate, it isn’t one I necessarily practice; and I’m willing to accept that to those living beyond the shores of England it may seem as baffling as Vineyard Vines is to me. But fundamentally, I struggle to understand why a grown man would do such a thing to himself.