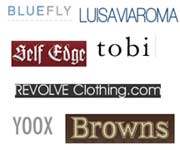 For the past 10+ years, I have lived in Los Angeles and Boston, with easy access to world class shopping. In Los Angeles, I shopped at Maxfield, Traffic, and Ron Herman, all world famous boutiques known for bringing new talent to market. In Boston, I shopped at the world famous Louis Boston, which has, in my opinion, the best cuts from Kiton in North America, and at Alan Bilzerian, who has a better eye than anyone else in Boston, and whose collections, with a strong focus on Japanese and Belgian designers, are a full lap in front of the competition. However, I am moving soon to a considerably less metropolitan area for work, and I wonder how well I will be able to keep up with the rising and falling button stances and gorge height, and the ebb and tide of hem widths. Am I going to have to resign myself to either looking tragically dated, wearing fashions as recommended to me by the New York Times Style Section? (Rule: If the trend is reported in NYT style, it has been dead six months. If the trend is reported dead by NYT style, the trend has been dead for a couple of year.) Or will I be resigned to the timeless monotony of pleated khakis by Dockers and no-stain cotton-poly dress shirts by Geoffrey Beene.

The good news is that nowadays, a guy in Podunk, Nowhere, can keep up with hipsters in New York, and get exactly the same gear. Whether this homogenization of fashion is actually a good thing is up to debate. However, it used to be that information and goods traveled at snail mail speed, and that being the trendsetter simply meant that you were a little better travelled then your Grade 3 peers. When I was in the fifth grade, I went to Hong Kong, from a fairly small town in Canada. I was struck by how varied the flavors of Polo Ralph Lauren shirts there were in the big city, and I came home with flavors no-one even knew about (although, they were clearly identifiable as Polo Ralph Lauren, because you don’t want to be too far ahead of the curve in Grade 5.)

These days, virtually anything that can be found in boutiques can be found somewhere online. And on sites like Styleforum, which I moderate, and Superfuture, trends and brands are discussed ad nauseum. It is becoming harder and harder to be ahead of the curve. Louis Boston, which prides itself on being a tastemaker, finds itself a little behind the curve, with its selections of Kings of Glory and Uppercut having been available from www.revolveclothing.com for a few seasons already. It is clearly not enough to have an “exclusive” any longer, since the internet renders geographical constraints on consumers nearly meaningless. You want the latest model of Rag&Bone and Acne jeans? Go to Arlington, VA based Denim Bar’s online site. Any manner of Japanese import brand can be found at www.selfedge.com and www.blueingreensoho.com. More of a high fashion type? Try Luisa via Roma and Browns and see what the best buyers in Milan and London, respectively, have chosen from the latest season Dries van Noten, Ann Demeulemeester, Dior Homme, Miu Miu, Martin Margiela, Balenciaga. Even a store like Alan Bilzerian has to rely on the buyer’s eye to capture the customer’s imagination rather than on the elusivity of the brands alone. Kiminori Morishita (congratulations if you even know the name) is only found at three U.S. retailers, but it is sold online at super designer discounter YOOX.COM

The bad news, and the good news, is that stores like Alan Bilzerian can never be replaced. I would not have discovered Fred Bare caps if I had not walked into his store and tried one on. I love hats, but apparently my head is a weird shape, and I cannot buy hats online. Not that I would have found Fred Bare caps online anyway. If you google the brand, you are likely to get a few dozen links to a Australian childrenswear company. And even if I had seen the waxed cotton hats online, I would not have felt the rough waxiness of the waterproof cotton, nor seen the workmanship that makes a simple cap cost upwards of $150. (That is not actually that bad. Eugenia Kim hats usually top $200, and my favorite hat of the season that was not bought was a satin cadet cap by Balenciaga to the tune of $325.) All in all, I’m glad that being in the hinterland doesn’t necessarily mean that I’ll actually be cut off from civilization and forced to endure the trials of John Deere caps and Mark’s Work Wearhouse jeans. However, I plan to take a bundle of money every time I get to New York, San Francisco, and Toronto, to find all those things you just cannot find online.