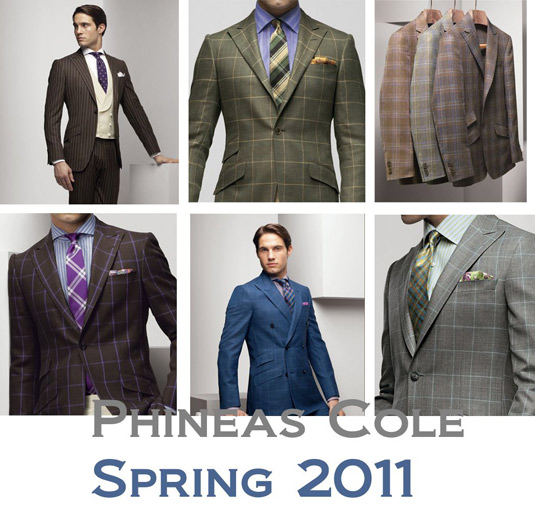 A year ago, my fellow columnist Stephen Pulvirent wrote an interesting piece about Phineas Cole, the fictional ‘errant son’ of the Paul Stuart brand; a jet-setting dandy with a penchant for plaid ties, unmatched pocket squares and loud(ish) suits.

A year on and young Phineas is still as delightfully affected and alternative. The new spring collection (pictured above) is a powerful advancement of arguments for pattern mixing, colour variation and avoiding dullness in suiting.

I recently indicated in an article, an abidance of my own ‘pattern triangle’; patterning no more than two items in the ‘Holy Trinity’ – shirt, tie and pocket square. Cole dumps such fearful thinking in the wastebasket with aplomb. Stripes, checks, paisley – a spice mix of incredible variety. The refreshing thing about him is that he flies in the face of modern ‘fashionable caution’ – a trend that has seen men restrict their wardrobes to plain navy neckties, white linen pocket squares and mid-blue shirts. He is all that is professional and personable about contemporary attire with the added raffishness and creativity of a ‘green carnation’ dandy.

There is a nod to Edwardian formality in the white double-breasted waistcoat look which, as an ensemble, is decidedly out of place; instead of the winking, knowing, Martini-olive-stick chewing nattishness of the others, young Phineas is restrained, conservative and curiously ceremonial – one assumes he is attending a serious, uptown matrimonial function and is being forced to downplay the jazz. Apart from the odd few plain examples, the spring lookbook is a stripe and window-check frenzy, an orgy of pattern; you can imagine such a man rushing into his tailor in January with a Dean & Deluca coffee, driven to unattractive irritation by the awful persistence of winter, demanding swatches of purple plaids.

As an example of having fun with serious clothing, there are few better. The looks are colourful, inventive and artistic but still elegant, presentable and aesthetically logical. The only problem is that such men are rarely taken seriously; Phineas would have a hard time convincing sourpuss venture capitalists that he has a cause other than himself, a calling higher than simply ‘having fun.’ Cole is memorable, certainly and utterly charming but universally liked? Respected as well as loved? It’s difficult to say.

To my eye, the look is still that of a well-dressed boulevardier, in command of colours and cut and wonderfully oblivious to the coughs of derision from elders and betters but to many, he is the personification of an overworked aesthetic fantasy.